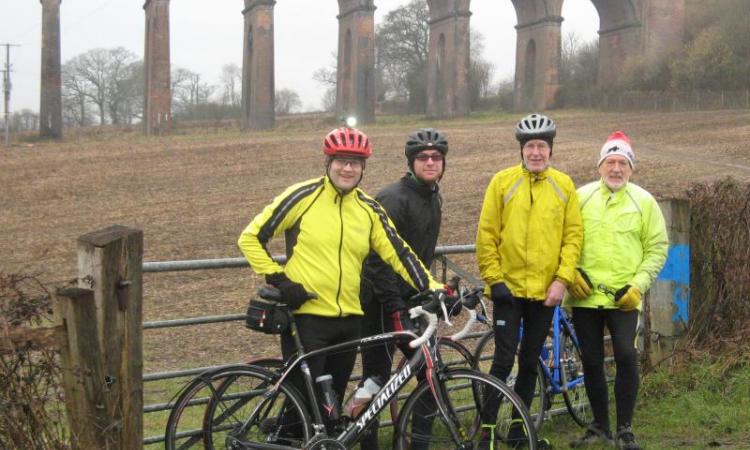 Jacquie had to cry off so I said I would lead the Sunday ride - a decision I regretted when I wheeled my bike out of the garage into heavy sleet. I would sooner have gone back to bed. Five more hrady riders were waiting when I arrived at Woodhatch Park, plus Geoff Clinton in ‘civvies’ to let people know the fast ride was cancelled (dare I say 'wimps'?!).

We decided to forget about Wiston as a destination and opted for a short ride to Tulleys Farm. Down the road we met Dan Bartley who turned round and joined us.

By the time we reached Colgate, the sleet had stopped so we decided to add an extra loop and take tea at Borde Hill. At Cuckfield, three members of the party turned off for a fast ride home. The remaining four continued to stop for a welcome cup of tea and a de-thaw. On the way home, we stopped by the Ouse Valley Viaduct where a railway enthusiast took our picture.

About two miles from home, the rain started in earnest, no problem as we headed home for a quick shower, bite to eat and a depressing afternoon watching England struggle to beat Italy in the Six Nations.