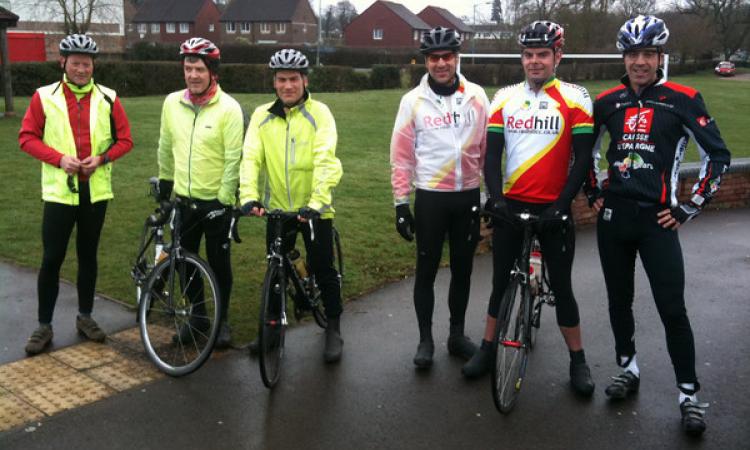 When I posted this ride I had imagined two of us turning up. 8am on a damp Sunday? Surely no takers. How wrong I was... Seven pitched up and according to the feedback en route, an early start suits befamilied folk whose brownie points only stretch to lunchtime. Anyone else up for an earlier Saturday or Sunday start so we can get 60m in and still be back before 1pm?

We set off at a cracking pace thanks to the post-Majorca fitness of Geoff and Nick who both wanted an even earlier return but fancied 35m and back before 11am. The pace to Edenbridge was close to 18mph average.

By the turn into Four Elms Road and the time had only just gone 9am we all decided this was a 'thoroughly good thing'.

The pace and average slowed up as we tackled Toys Hill. Damon 'first up the hills' Crawshaw and Kevin Greene both looking extremely strong while yours truly decided to rest the legs for later (that's my excuse and I'm sticking to it!)

No sooner were we down the quick descent through Brasted than immediately back up the North Downs again with a quicker ascent of Ide Hill. At this point, our attempts to follow the VO2 route foundered a little. We found ourselves descending only to miss a turn and re-ascend. Simon Deefholts - enjoying the freedoms that come with having kept home for a week while the other half trained in Majorca - was heard humming 'Because the night.. has a 1000 Ides' - Ho ho ho!

With a little bit of iPhone consultation we found a route back to where we were meant to be. At the top of York Hill, a local hailed us with what we took as a jolly greeting. In retrospect, I think he may have been trying to warn us. In a raw test of brake blocks we descended this horror that was strewn with mud, gravel and potholes. It knocked our average as we should have been bombing down after all that climbing but instead crawled.

Still, a fast section alongside Bough Beech reservoir got us back on track before a small tour of grotty lanes around the Weald led us to the high spot of the day - Hall Oak Lane. Some cycling genius clearly decided once upon a time that this area of Kent needed a nice long smooth fast traffic free lane. And this was it! The whole group zipped along in Simon's wake at around 20mph before turning left to Chiddingstone and then the climb up to Penshurst.

After a garage waterstop and with over 42m on the clock, the consensus was to follow a swifter passage for home before people started turning into pumpkins... so we took the direct route via Grove Road.

Superquick from there all the way back to Redhill - an average of nearly 18mph once again for this section, delivering the remaining bunch home for lunch well before 1pm with some 62miles on the clock and an average of 15.3mph.

A revelation and the sun was shining on us for the last 10 miles. What could be better?