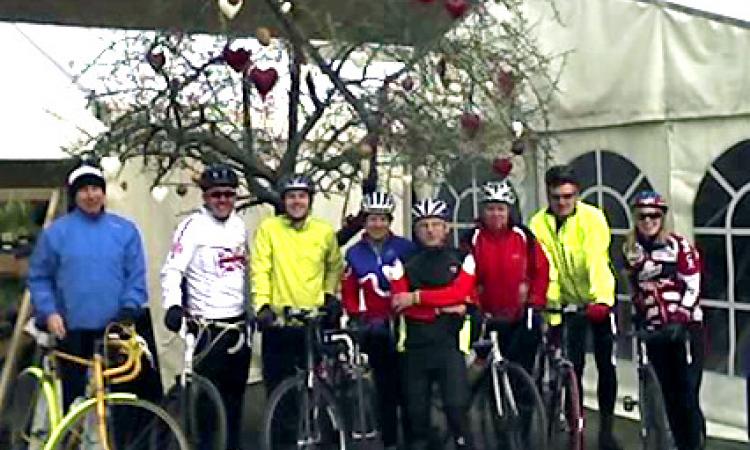 Ten riders signed up for this week's moderately lumpy ride to Tulleys Farm. Hopes of 10C from the Met Office looked fanciful as we headed down Slipshatch Road with a solid-overcast sky and the temperature just plain cold, again.

At Leigh we turned south towards Charlwood, down Norwoodhill Road at a brisk pace. Right at Charlwood, past the Lowfield Heath windmill and up Russ Hill, cold. South at Partridge Lane to Rusper and on to Faygate.

Roundabout at the A264 was exceptionally busy, so thanks to the lorry that pulled out next us, paused and waved us across.

After the long climb up Tower Road we re-grouped outside the Dragon pub (now slayed by the recession), still cold.

Jonathan (first rcc ride since the 90's!) headed home from Colgate while the rest of us dived down Blackhouse Road. At Grouse Road, we waved the girls through, gave them a half minute start and then set off. Sharon pedalled like crazy to stay ahead for nearly two miles, well done.

Down the dip and climb of Hammerpond Road, through Slaugham and Staplefield and onto the long climb of Brantridge Lane. Ian punctured 2/3 of the way up, so we set to replace the tube while Jo provided the psi with a cartridge thingy. Lucky as the valve stem was the short variety wouldn't work with a normal pump.

Reunited at the top, we headed along High Street and Brantridge Lane with the final blast down Turners Hill Road, to Tulleys at the 32 mile mark. Andre had headed back home at the top of the hill which left the remaining eight to recharge on tea/coffee/cake etc. Those of us who rode this route last year recalled the climbs as hard work, but now not a problem.

As we set off for the ten flat miles home, the weather brightened and the temperature picked up. Maintained a good pace via Copthorne, Smallfield and finally back to the park. So thanks to everyone for making it another enjoyable Saturday morning.