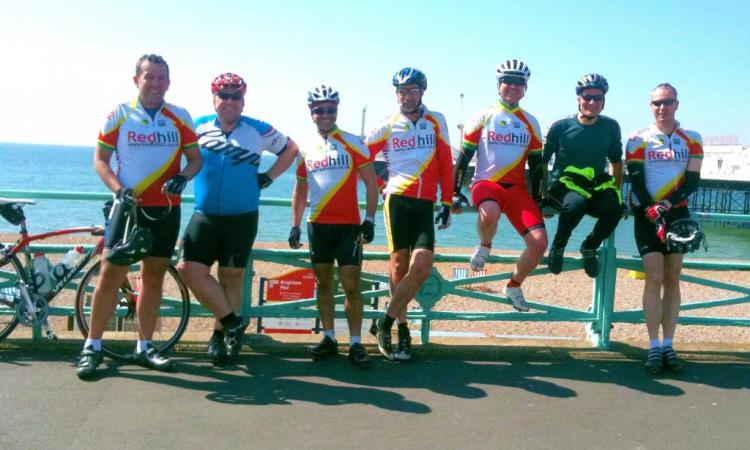 You really couldn't have picked a better day for a trip to Brighton and back. Sunshine, warmth and no wind. The crystal clear sky at Woodhatch Park remained almost exactly until our return. Four riders started out and after 13m met three more at the top of Turners Hill.

A 7:45am start isn't for everyone... but on days like this there are real advantages. Particularly given that we reached Ardingly by the time others would be leaving Woodhatch Park giving us chance for a big old ride while still making it home at the latter end of lunchtime.

Now, a first rule for anyone planning to lead a long ride when you're not feeling particularly fit yourself is to fill it out with riders in form - whose wheels you can hop onto!. Graham Tucker, Martin Bell, Andre Didon and Damon Crawhaw were fit as butchers dogs today.

In fact, we were all strong on the way down, zipping down the classic London to Brighton route and straight up Ditchling Beacon... a quick photo stop... then superfast down to the Coldean Lane junction and left for the awesome descent to Lewes. I noticed Mark Vincent looking back almost disappointed at the speed camera as he shot through (I registered a maximum of 47.5mph - I think Andre's and Mark's were higher.)

Once in Brighton, it was roasting but The Regency restaurant (super cyclist friendly - they even have their own mini team) was a perfect teastop. They filled our water bottles and dished up classic egg and bacon sarnies.  Ian Taylor and Mark (see the retro pic) were disappointed only by the lack of sherry trifle on offer at 10.30am

The turn for home was a mixed bag. The drag up to Devil's Dyke was fine then after an undulating section we reached a few roads that were the best a few of us have cycled on all year. Fast, beautiful country lanes with a great surface. It was one of those average boosting spells. The dream ended with a much trickier bit from Wineham to Slaugham. Not only were there steep little moguls every few hundred yard but the local council had - in its wisdom - resurfaced huge sections with crushed breeze blocks and broken glass.... or at least that's what it felt like.

The happy band split at the Lower Beeding crossroads so that Ian, Mark and Andre could head back up to Turners Hill, while the remainder headed home via Grouse Road (resurfaced with shrapnel, stalacmites and broken coral).

Once back up the drag to Rusper, another burst of speed got the long group home before 2pm.

I had 74m at an ave of 15.8mph. Martin (whom I must thank for impeccable fitness and manners, particularly for waiting and dragging me along when the dreaded Fading Chairman syndrome struck) had the same at 16.2mph.

The Turners Hill group had 54m.

Excellent morning Gents, thanks to all of you...