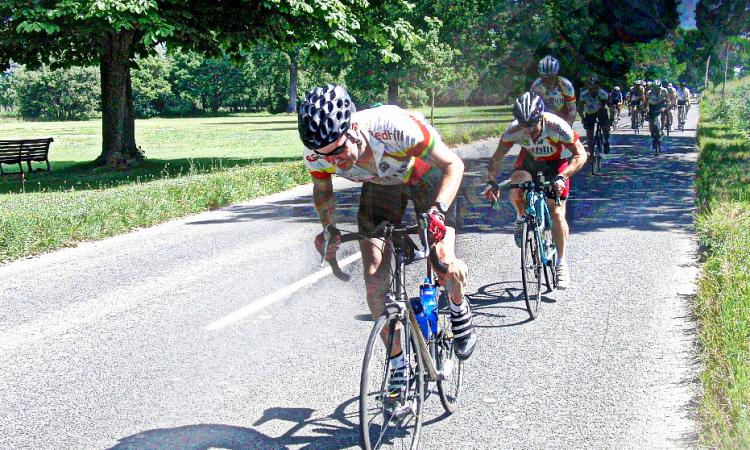 The Reigate Sportive looms...our big home fixture for RCC roadies and we're hoping for a cast of. well, scores if not thousands. But when I put a reconnaissance mission in the diary for 7.45am on a Sunday I expected maybe five or six takers. Foolish boy! In the end 16 riders turned out including a new face for a glorious if rather hot 62miler around Kent.

I have to apologise up front to everyone however that the ride - albeit very beautiful - will not help you that much next week given that we did it in reverse. I downloaded the map, I printed it off, I even handwrote directions on an inch wide sticker on my top tube but we started and continued clockwise.  Next week WILL be anticlockwise, so that wonderful descent from Chartwell down to Staples Barn in Four Elms will transform magically into a super long drag. Sorry.

So, back to Woodhatch again... and I have to confess it's always a bit of a worry when a ride leader who's not feeling at the top of their game attracts so many strong riders like bees to a honeypot.  I ended up craving someone to provide a bit of 'slow-climber shade' that I could hide in. No such luck! Russell, Graham Tucker, Stuart G, Andre D, Meera, Nick Brookes, Chris Hall, Kev Greene, Andy Gardner (looking a bit bony!) etc etc... it was like a manager naming their strongest Sportive squad.

We were also joined by Andrew Walker - well known to Reigate Priory Athletics runners as a frequent 10k champ - who was super-strong throughout and (unofficially) by Ev Quistorff - fresh from 50+m with Russell the day before on a fixie  (!) who added wicked humour, speed and great route knowledge to the mix as well as the odd bike tip. Thank you for tagging along, both.

Even in reverse, the route was a bit twitchy. Lots of unexpected twists and turns making familiar lanes unfamiliar again by stringing them together in a stange order. By all accounts, though incredibly beautiful. We had set a sociable target of a 16mph average and actually clocked nearer to 17mph throughout - the gold standard for next week's mid route.  And this was with plenty of chatter, banter and easy rolling through the lanes. I was agnostic about a tea stop but we stopped at Occasionally Yours and sought out whatever shade we could before a zippy return via Newchapel Road and Bones lane.

Nick Curran muttered route asides the whole way and on the nippy last 12miles ended up so far off the back that Kev and I started to be concerned that he migt have been swallowed whole by one of the infamous potholes that pepper the stretch between Smallfield and the M23. In the end, I turned back and found him ploughing his usual personal furrow at a personal pace. That's the Nick we know and love!

Thank you to everyone for making the early start - it kept from suffering too much mdday heat and even in reverse, I hope it gave a good idea of the challenges for next week.  Work together on the flats, careful on the descents, take two bottles (into the shower), keep fuel stops brief and give your tyres, brakes, chainset and gears a bit of attention well before seting off (like the day before).

Sportives are not forgiving when it comes do mechanicals!

ps. apologies for slightly dodgy photo... it was so hot we had a lens steaming issue!