We all rode to Mark's house! 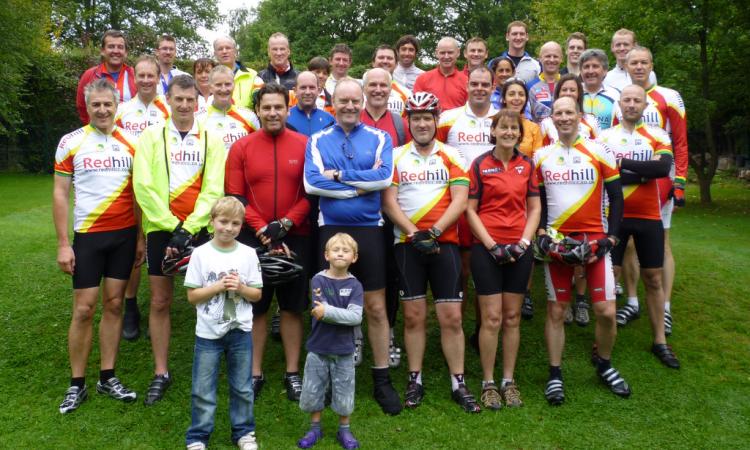 The morning started with an excellent example of what not to wear as the winter sets in. The Smurf turned out in full black diving gear... apparently only lacking a face mask and aqualung.

From there, everyone set off in different directions. In fact the G1 and G2 rides passed each other going in opposite directions near Smallfield (how did that happen?). The G4's went both up and down Cob Hill Lane (masochists!) while the G3's saw a touched wheel tumble that did for both John Mc and Tim Sales.

The G2's ambled out to Haxted and through to Crawley Down via Lingfield. Lovely folk and a lovely morning despite the drizzle. More to follow here as stories flow in... but a HUGE thank you to Mark and his family for hosting all of us.

The G3 Write Up from Martin Bell

Good old Tulley's loop. It is a route we all know and love! So, when it was agreed that we would try to ensure that all rides leaving on Saturday morning would converge on Mark Vincent's house in Crawley Down, the close proximity to Turner's Hill immediately had me thinking that some sort of Tulley's action was in order!! Although of course, the creative part within me was already wondering how we could spice things up a bit!! As it turned out, we had plenty of excitement long before anything I had planned…read on if you dare!!

It was a damp start to the day as all riders gathered at Woodhatch, but nevertheless there was another excellent turnout for many of the rides including this G3 ride, nestling snugly in the middle of the Saturday offerings! With little ceremony and certainly no pomp, 13 riders including myself set off to complete the first half of my planned route, the lovely leg stretch out towards Turners Hill via Newdigate, Rusper etc! Now the saying goes '13, unlucky for some' and while it is easy to scoff at such superstitious bunkum, in this instance it turned out to be true…for just minutes after we glided past the Tanhouse Farm and were really finding our rhythm disaster struck!! From the front we didn't see anything, but we heard the anxious shouts and the sickening sound of man and bike meeting the ground in an unplanned halting of speed and distance!!

As it turned out, John McMullan had done a little wheel shimmy with a rider in front and in the process had taken a very heavy tumble landing practically face first on the wet and knobbly tarmac! This was no playground fall either! John was unconscious for a brief period of time and it was immediately clear that he would need a proper check up and so the emergency services called! Thank goodness he had his helmet on, for it definitely made a critical difference! In the melee Tim Sales who was just behind John had been caught out by John's sudden halt and he too ended up off his bike and was also suffering with a very sore shoulder! It was clear that neither would be able to ride on and so we waited to Tim's wife to come and collect him and the ambulance to come and collect John. Luckily John did start to regain his mental acuity and was soon worrying about having something to eat and what was going to happen to his bike. In the end we were well attended, with two police cars and two ambulances at one stage all flashing lights…on a personal note I was disappointed that the Fire brigade did not make it out to our '999' party!! In all seriousness, this little accident happened to experienced riders and came out of nowhere, and highlights the importance of wearing a helmet and completing the sign on sheet at the start of the ride!!

So 13 became 11 after a long wait, and as a result we shortened the usual Tulley's route slightly, keeping to the main roads via Handcross to get to the tea stop at Mark V's house, fortunately I am pleased to say without any more drama!!  We arrived just in time as the other rides were waiting to leave, and after the group photo we calmed our frayed nerves with some hot drinks and baked treats laid on by Nick C.  The rest of the ride passed without too much incident, just some seriously furious pedalling between Newchapel and Smallfield as we made the most of the flatter, quiet roads and put the hammer down well and truly…Peter Marmite (who backmarked with aplomb as usual) and newbie Nick Preston showed their class on this stretch, helping to drag others along with them..and of course the flatland specialist Nick Curran, who had joined us for this part of the ride, was making sure the pace up front was honest!!

At Smallfield we split as some riders needed to get home to wives/families/the couch, and a group of 5 of us made our way up and around the Bletchingley circuit which left us all absolutely exhausted by the time we found ourselves on the roads around the hospital and Woodhatch bound!! I had 47 miles at an average speed of 16.5 mph (a little faster than advertised, but the route was flatter than usual), plus two ambulances and two police cars of course!!

Thanks for the ride