The Gathering of the Gs 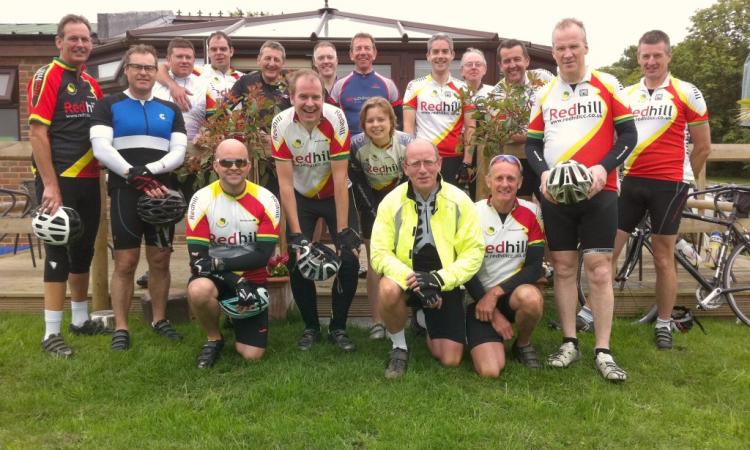 Luckily we had all planned routes that saw us end up there at intervals. G2 first, G3 second and with a little more climbing to do, G4 last.

Marmite Pete decided to dose out his usual mix of pleasure and pain with an ascent of Chalk Pit Lane and Ide Hill thrown in, I gather. Even more painful for Steve K who undertook most of the with a choice of just two gears but still managed all the challenges. Meera pitched in despite a painful hamstring and Pete reports that Brian #2 - a new rider to G4 - rode extremely strongly while Lewis reached a few summits first underlining his current form.

The G3's meanwhile headed out to Lingfield and took a right turn to experience the hilly pleasures of Blackberry Lane and Mutton Hill, before taking in Cowden, Mark Beech and Penshurst. After 'Jam Gate' a few weeks back where the constrasting proprietor of Quaintways chased a rider for 50p's worth of jam, we decided not to stop there but to head on up the hill, sweeping down towards Bough Beech and the back way to Four Elms.

With the G3s were Chris R, new rider Calvin looking ready aready for the G4 step up after lots of work on the front, plus Andy G, Ian T, Clive, David B, Graham B, The Smurf and Leeson.

Leeson deserves a mention. Proof positive that multiple spin classes a week can be beneficial, Nick was expecting him to struggle after only a few weeks back riding with the G3s. But no, Leeson shot up the hills and stayed at the front the whole way.

At the Barns, they served tea, buns, pasties, toast etc to perhaps 50 RCC G2, G3 and G4 riders. It may have been the longest tea stop ever but it was all done with smiles and good grace.

The return journey for the G3s saw us head up to Pootings and left for the scenic route home. Near Merle Common, David suffered the only puncture of the day and as a few people needed to be back (and  Nick had turned directly towards home) after that the pace picked up very strongly. We averaged nearly 19mph from Lingfield to New House Lane.

By the time Redhill was in sight, we had just over 50 miles on the clock with 2975ft of climbing (it was undulating rather than sharp climbing but it all counts) and an average of 15.8mph.

Superb spirit and riding from everyone - as per usual.