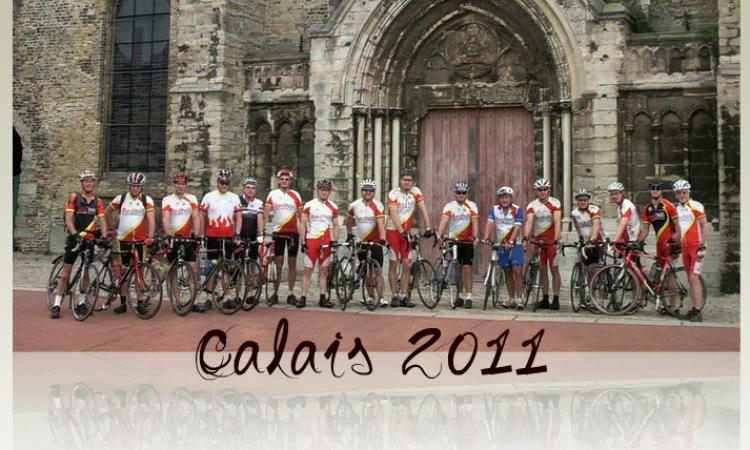 Pièce de résistance - definition: "A French phrase meaning a masterpiece or the most memorable accomplishment". Resistance - definition: "A force that tends to oppose or retard motion". During RCC's second Calais weekend both definitions came into play. Unlike the 2010 edition, our centrepiece rides on Saturday were gloriously sunny and calm yielding memories that will live with many forever. Sunday on the other hand started with glorious sunshine and speed but during the last turn for home (40miles in some cases) many had to dig deep into themselves to battle an unrelenting headwind. Here are some of the highlights and memories of a fabulous weekend.

First, we salute the Hotel Meurice in Calais. Mike O's amazing find 12 months ago and our 'home from home' for a second year continued to surpass expectations on all fronts. Great food, clean, friendly, superb value and a cracking Hotel Hound, Zeus,  who was gentle all weekend apart from when he growled at John H for telling him (in English, doh) to go away! When reports from this trip get around there will be even greater numbers booking in for 2012 and maybe the hotel will order more beer after Leffe Geoffy Clifton and others reportedly drank them dry on Saturday night.

But on with the cycling tales… which began for some on home territory. Brian, Steve T and Stuart B all started their adventure with 70 miles from home to Folkestone for the Eurotunnel. Rupert and Phil also rode to Dover for the ferry.  Cheryl and Terry racked up 40 miles and then train. Others loaded up as many bikes as cars would carry and took advantage of the superb value on the Eurotunnel. On arrival, to make up for petrol power the Houghtons, Ian T, Liz and posse went out to get acquainted with the environs for a first recce of the routes around Calais. First impressions: bon!

By 7pm, the underground car park was awash with Specialized, Van Nicholas, Pinarello, Tifosi, Roberts, Planet X  etc but who had the willpower to stick to just one glass of beer/wine? Who would consider the long rides ahead the following day? Who would remember that 'races are won in bed'?  Certainly not the 'old codger' crew who had already stumbled into a gay bar 'by accident' and then took root next to the Meurice beer taps.  We have to assume that eventually everyone went to bed because the RCC shirts were out in impressive force over breakfast.

(Apologies that not everyone's in the headline photo. Due to ride splits, we were never all in one place with bikes).

SATURDAY: The weather was perfect. Warm but not hot. A stiff breeze but not the wind of yesteryear.  The breeze was blowing from the opposite direction to the one that savaged us on the return in 2010 so the first 25 miles out of Mike’s ride to the Samer coffee stop felt somewhat tougher and hillier than 2nd-yearers remembered.  So much so that on arrival in Samer the large RCC queue that formed at the excellent patisserie opposite clearly alarmed of the patissiers and the locals. Martin spied the great St Honore cake. Like the Sydney Opera House but in pastry, fruit and cream. Mike ate it. The cream meant that we saw a Blanc Nez much earlier in the day than we expected.  People bought whole Tartes. They were all eaten. Good job too!

Disciplined pelotons formed after the post-Samer climb to enjoy the heady rush of the undulating road to Montreuil, whizzing along the ridge for 10 or so miles, we pushed averages up to the 'very respectable' bracket. Then the descent and TT-esque section of carriageway before a cobbled climb to the photocall at the General Hague fountain.

One group went direct to the statue, the other decided on a spontaneous Tour Du Market Square... then we gathered to remark how the fountain - which wasn't working - looked more like an industrial accident than the oasis of last year. A chirpy local urchin relished the chance of being in the centre of the picture with such a well-turned out bunch and remained centre-stage (mid-horse) on one of the photos.

Back down the cobbles and a blast to Etaples for lunch al fresco. That road! Gorgeous. Smooth, quick... smiles blooming on every face. Well, until Martin’s sat nav looked to rob us of lunch and we turned back into town to bag seats at the same restaurant as last year. Warm (very warm in fact... it was humid enough to make the sweat levee break) but the food was again cracking and we even got to wave to the wedding party before heading off.

Brian suffered the only puncture of the day soon after lunch and the less scorchy bunch decided to push on knowing we'd be caught sooner or later with Rupert and Team Costello in pursuit. Onward to Boulogne via a very long section of cycle path. This year there were no 'seven hills' in Boulogne. The correct route took us alongside the estuary at pace before the long gentle climb that marked the start of the coast road.  The wind was picking up but to help rather than hinder us... and no sleet!

A quick photo above the turquoise sea and huge beach then on to face the deux Caps… Gris Nez and Blanc Nez.  One of the long drags out of Boulogne proved the ‘cracking point’ last year. This year, we ascended it cheerfully and onward with some 80 miles on the clock, for the very long climb to Gris Nez, the superb descent to Escalles and then the sight of the Blanc Nez zig zags. Again, a tough climb but one everyone relished. Clearly the sight of an annual hill climb the road is sprayed with ‘Allez Titi’ … it might as well have been Allez Charl, Phil and Rupert because it was at the top that they caught up having put in considerable higher speeds to reach us. Chapeau!

Next, the long downhill and flat through Wissant and Sangate to Calais. Were were all tired? Not a bit of it. The spirit was racing and everyone was on an 'end of ride' high. Combine this with the momentum from the descent and flat or slight downhill roads right through to Calais and it was a red(hill) rag to a bull.

The front peloton kept an average close to 22mph for the last eight miles - only slowed up when impeded by cars!

During the next 20 minutes everyone else swooshed into the Meurice underground garage/sauna with tales of their adventures on a truly great day of cycling. 97 miles

A very select group of nine left the Hotel at the civilised time of 9.45 heading south in the general direction of Montreuil. My plan was to head for a  town called Desvres, stop for lunch and then reconsider our route.

After Guines a badly marked route and  one way street saw us adding an extra eight miles to Desvres and with a strong headwind and  a few hills our speed dropped to G1 status.
At Desvres,  a cafe was found that had enough room for us with lots to spare, the reason for this became apparent when the strangest Welsh Rarebit I've ever seen was delivered to the hungry RCCers. It was toast, Jim, but not as we know it! On top of the toast was a thick coating of what looked like custard but tasted vaguely of cheese, according to what had been ordered contained in this concoction was either ham, spaghetti or more cheese. I escaped this by having soup! Nobody finished (excellent though for adding 'internal brakes' and slowing them down on the return journey!)
The return journey was very very pleasant, with a few hills but a strong tailwind. We literally sped back with the reward of a giddy two mile 30mph plus hill down the D127 back into Guines.
The ride into Calais alongside the canal in beautiful unforecast sunshine, was brilliant, despite my trying to take the group off road on the opposite side of the canal (ever get the feeling no-one is following you?) everybody was satisfied with the 58 mile Saturday ride with a difference.

Lots of early discussion in the garage... would we have time to make it to Belgium and back for Adrian's gang to make it to the Eurotunnel train in time. In the end, we headed all out together in the direction of Bourbourg - a split point to decide. And my, we headed out.
A tailwind out into the flatlands north east of Calais saw a disciplined 2 x 2 peloton whipping through the eerily open countryside. Villages that were gained with sodden attrition last year flew by with easy pedalling yielding 20mph speeds.
A slow flat for Brian around Vieille Eglise saw some of the fittest of the bunch waiting with him while everyone else headed on. They could catch us surely...? And indeed they did. Steve T, Rupert, Brian and Geoff  reportedly chased for nearly 15 miles to get back to the bunch in the square of Boubourg.
We split into two groups: one heading for Belgium and Poperinge, led by Mike, one heading for Caselles, led by Steve T who'd been there before. As the weather started to turn, coffee was calling, so we headed into a Flemish looking and sounding town with a wonky spire. Inside, the patrons were persuaded that there might be some of the Rugby World Cup to watch... and yes, it was difficult to get everyone back out into the rain!
The push onto Caselles was the first tough bit of the day. Caselles is up a switchback climb but once up there it is a gorgeous chitty-chitty-bang-bang  town. Steve's group found a sympathetic restaurant that unfortunately served up some unsympathetic lamb and coarse sausage (don't ask!). Meanwhile, Mike's group had made Poperinge in double quick time and whereas the shorter group only had to climb the smooth way up, they had the cobbled climb from the opposite side on the way back. Ouch.
In fact the return journey was 'ouch' for all. The tailwind that swept us so swiftly out blew in our faces and sapped legs on the way back. Tired legs masked by the joys of the last 24 hours started to find time to whinge.
A hill is tough but you reach the top and you have defeated it. A headwind turns the flat into treacle and there is no triumph... just adversity.
Eventually, everyone made it back to Hotel Meurice but those miles - sometimes unrelenting at G1 speeds - were hard earned.

On Sunday we left slighty earlier under grey skies with just a tad of rain, following Mikes route to Bourbourg, this time with a tailwind, the route is flat and the land is fairly featureless  but the banter ( no mention of cycling here, rather more down to earth I think) kept the group bowling along cheerfully.
The route instructions were good and we were in Bourbourg in plenty of time to enjoy patisseries and coffee in the square.
Having covered about 30 miles I took a look at the map and plotted a route back that although flat would give us about twenty miles of headwind, the weather held off and  we arrived in Calais once again in bright sunshine.
The weekend has been a resounding success and the people I rode with were great. Hotel and food also good.
Looking forward to next year's adventures.