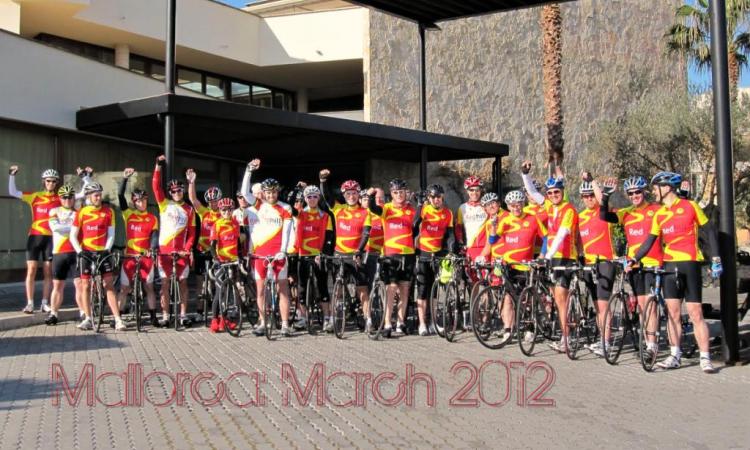 Please will people add their own stories below. The author was party to his own but heard some corkers: the 112 miler that emptied the G6'ers; Olly's descent of the Col de Soller; the coast road when the racers picked up a rider who must have been Jens Voigt's cousin; Brian's ascent of Sa Calobra and Maria's a few days later; the 112 mile ride that rendered a few incapable of lifting forks to their mouths...  Let's hear them all.

8,000 miles? Well, given the ride lengths and the number of people riding each day, this is a conservative estimate of the distance covered. The G6s must have covered nearly this each!

To get the stories started, here are a things really worth mentioning:

1) The Sun Shone: The weather was amazing from Thursday to Sunday. Clear blue skies and warm but not too warm. Riders emerged at 8.45am in gilets and arm warmers usually to shed them within a few miles.  The resulting sun tan lines when they also forgot to put suntan lotion on were true Redhill Red!

2) Aprarthotel Heaven: The Aparthotel Duva was a revelation. Nice rooms, lovely pool, gym but best of all LOADS to eat. As much as you can buffets at breakfast and dinner with superb food to replenish the empty.

3) Rides and Cols: There are some great fast flat rides and plenty of moutain challenges. And some mix and match too. The climbing really adds up when you strung a few Cols together... or even a flatty followed by the ascent to Randa. The G3/G4 88miler on Friday took in a handful of major climbs plus one 3000ft descent into Soller that was nicked from cyclists' heaven.  In the end, people got home with nearly 9000ft of climbing in a single ride... only to find out the G5/G6ers had done 112 miles and even more ascent.

The Col de Femenia at 515m was almost on the door step, the Col de Soller switchback endlessly, the climb from Orient was a brute!

4) Tools and tubes near superfluous: Hardly any mechanicals or punctures. Given there were 28 people riding all day, a Martin Bell double puncture and Olly Gin snapped chain were among the only bike ailments.

5) Cheesecake: Many of the tea stops were brilliant. The Cheesecake at Petra became the stuff of legends. The lunch at Campanet superb. The G3/G4 88 miler only managed a bag of crisps and donuts at a petrol station which wasn't so hot!

6) Peak performances: Some riders really pulled the stops out. Rupert drove the G6s on all week with Ryan, Will (they were determined to break him and managed one night!), Phil J, Dom, Brian, Olly, Peter F, Barry, Maurice, Jonny B and at times Nick B, Geoff, Nathan and Gavin pitching in too, all recording some of their most memorable quick rides ever. Tales of 36mph sections  were common! The ladies were a revelation... Lisa for speed, Maria for climbing, Michelle for both at times. Then Nick Curran after a few false turns put in a solo ascent of Sa Calobra when many others took it easy. Leeson gained a reputation for the most awesome calf muscles in the whole peloton... get that lad on the track! Then the backbone riders... Martin who lead superbly each day, Rob Neal, Jeff B, David Shanks (occasionally mixing Dulwich Paragon and RCC colours in a fashion faux pas), Damon, John Mc. The ability to take four whole G groups out so that each day there was a range of abilities to stretch yourself or rest yourself with really added to the tour,

7) The Team RCC car: We were also perhaps the only non-Pro team in Mallorca to have the constant attention of a support vehicle stocked with bananas, water, gels, tools and the occasional lift. John Eg was a legend and added a whole new side to a superbly organised trip.

The only real misfortune of the week was Mike O who suffered a detached retina just as he was building back up to fitness. A great set back but thankfully at the time of writing one that is doing well and will not stop him getting back on his bike and back up where he belongs!

This was the most superb trip... every rider will return having made a step change in their fitness and perhaps their own expectation of what they are capable of. It was all made possible by Nick B and Geoff... who should be up for Knighthoods for making this happen. Next year, I can see 50 of us there.

So Mallorcan riders, please post your own stories and tales below. This page will get 1000s of hits because it's the stuff that lights up a wet winter tea stop for years to come!