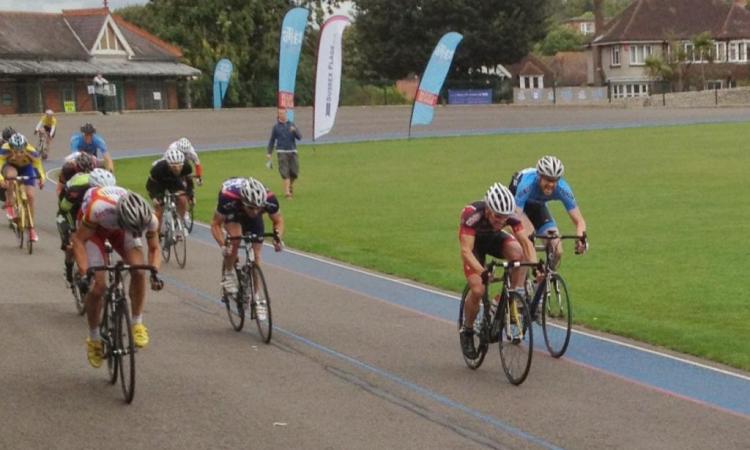 Going into the race, the Redhill team had talked tactics and decided they wanted to push for two things: Keep it together for a sprint, or let one of the Redhill riders get up the road with someone else. On top of that, Kieran had volunteered to put in a final lap lead out, designed to set Ryan up for the finish. With the wind building as the riders warmed up, it seemed like it would be a tough day to protect from break-aways, but with a strong team, Redhill felt confident that they could engineer it to work in their favour, whether that was having a rider up the road, or a fast finish with the bunch.

As the race started, Kieran began setting the pace to discourage anyone from attacking. The group quickly found a rhythm, with all three Redhill riders putting in quick turns to keep the pace relatively high. Dulwich Paragon had turned up with two strong riders, and were contributing well alongside several other cat 2s who looked like they wanted to ride hard from the gun. Kieran's pace was nice and quick during the quiet periods, and helped to keep the TT riders from going off the front.

After the first 10 minutes, riders started driving off the front in ones and twos, trying to get a break going. Brian and Ryan were taking it in turns to go with them - Brian riding hard to drive small breaks on, or Ryan jumping across gaps and sitting in to pull it them back. The first real break to get away started on the back straight, just as Kieran was finishing a turn; Ryan jumped from the second wheel and went with it, quickly gaining 10 seconds on the pack. However, after a few laps there was an organised chase, so Ryan pulled the plug and let the bunch swallow them back up.

A little later, Brian made a move to follow a lone break, and quickly made some time on the bunch. Again, the rest of the team sat back to let others chase if they wanted, and three or four riders quickly got organised. Brian was driving the break hard, a pace that his companion couldn’t sustain. After three laps, Brian was left on his own out front as his break partner cracked.

These small breaks and chases happened a few more times, but adamant they didn't want a break to go, Redhill continued to play spoiler tactics by following all attacks to prevent them from driving away. After 45 minutes, it was obvious that a break wasn’t going to get away and that we were going to be treated to a bunch sprint for the finish.

When the five lapsto go board went up, the pace dropped for a few minutes as teams got organised. Redhill had a plan set out from before we started, to have Kieran drive the pace on the final lap, but after his early race heroics, it wasn't clear if he would have anything left for the final.

As the bunch swelled, Ryan kept the pace high to avoid any big surges, so he hit the front and encouraged other riders to follow or ride through, to do anything to prevent a last minute attack. With two laps to go, Dulwich Paragon hammered over the top of the bunch in a two man train, trying to set it up for the finish. Ryan had to wait for a few more riders to follow before he could get some space, and had to go full gas with about 800 metres to go to get a wheel, seven riders from the front. With a lap to go, the Dulwich train went for it and pulled a two bike length gap over the third placed rider.

By this stage the top 6 riders had stretched out, leaving Redhill with a lot of work to do to move. Jumping onto the wheel of a fast moving InGear QuickVit rider, Ryan found some better position, going full gas onto the back straight to get towards the front.

On the back straight the Dulwich sprinter went for it, with the InGear rider pulling over the top with Ryan on his wheel. With only 200 metres left, and due to the banking on the final two corners, Ryan had to wait for the final straight (no more than 40 metres long) before he could push on.

As the pack came off the bank, Ryan went right, between the barriers and the pack, and kicked hard, pulling ahead in the last ten metres to win by a wheel and take home 15 more points towards his 1st category license. Only 25 more to go.

All in all it was a great ride by Redhill. They worked well to support each other, Kieran did a great job of keeping the pace high, and Brian gave himself a shot at the win with a few well timed breaks. In the end, Brian came 9th overall, with Kieran rolling through at the back of the bunch, happy to have played such a big role for the team.

In the masters race, Brian rode in a fast moving four man pursuit to chase down a lone Elite rider who attacked on the first lap, dropping the rest of the bunch in the process. After driving the pace for an hour, they didn't quite catch him, but Brian finished 4th overall to take home 10 points for the day. Only 6 points needed now before he makes cat 2. Superb riding.