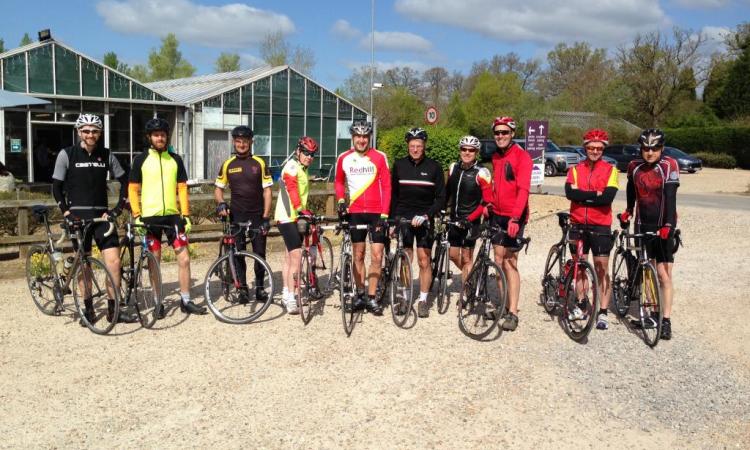 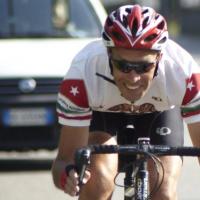 A relaxing Sunday reunion for Charles H, Chris S and Pete T was planned to meet up with Ed from our Dolomites trip last year. Richard M and Andy W were also invited along for the ride.

When Charles and Pete arrived at the Angel there was a mysterious stranger sitting over in the park. This turned out to be Matt K and when asked where he was off to today the response was “With you”. Cue Brian C, Calvin L and Stuart G to appear out of nowhere and a bashful Chris owning up to having invited them along after yet another Saturday G5 mega ride.

No time to dwell on the implications as we had to get over to Pilgrims Cycles at West Humble to meet up with Ed. Arriving there we found that Ed had also brought along mystery guests in the form of his sister Kelly and Richard (RT) who was our support driver in Italy.

Charles thought we should head for Notcutts so we were straight into an ascent of Ranmore. Kelly wisely decided not to get involved and went off to do her own thing. For the rest of us it was a burn along the ridge before ups and downs to Shere (Andy left us at this point) and then the long drag to the junction of Hound House Rd and Crocknorth. A swift descent of the latter got us to Notcutts via a much lumpier route than normal.

Nice and relaxed sitting out in the sunshine and the chance to admire Matt’s super-smooth unshaved legs. A quick discussion on Brian’s tagging, a photo-call with Calvin uncharacteristically at the back, a complete blanking of Charles’ suggestion to throw in a loop of Leith Hill and then we hit the dash for home. There was an inevitable split as the pace cranked up but despite the reunion being hijacked it was a very enjoyable ride on a fantastic spring morning.