Taking on the Tour of Flanders 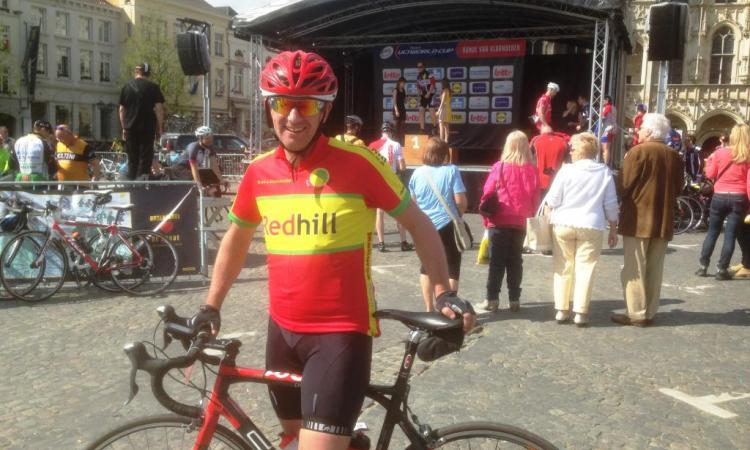 Cycling enthusiasts have to see a Classic once in their life. Last Saturday, as a precursor to one of cycling toughest classics, the “Tour of Flanders” or RVV, 15,000 cycling people from all over the world participated in a very well organised 85m cyclo-sportive which follows the Flanders pro route in the hills surrounding Oudenaarde, Belgium.

Flanders has always been my favourite.

The saw toothed profile of incessant hills with some ranging up to 2km long with gradients up 22%. Worst of all, most of these hills were on narrow ill kept, dusty treacherous cobbles made for hairy and brave riding. No wonder the locals are so good on their bikes. Throw into the mix, 15,000 other mad cyclist and all of a sudden you find yourself like a snail balancing on a razor blade and participating in the lycra Muppet Show!

the hold on bottles. The only other adaptation to my gear was an extra over layer of cream to my thickest padded bib shorts.

Getting a 28 tooth was a first for me. I have never gone beyond a 25 in my life. But I reasoned that having a 28 would enable me to slow down to a measured spin in order to negotiate around pavee walkers, spills and crashes on the steeply cobbled hills.

The plan was to accompany a mate of mine around the course and enjoy the ride. He had given me the green light to go for it at the foot of the signature hills and I would wait for him at the top. So what happened?

The plan worked well up to about 45 miles and after summiting the Koppenberg, my front rims exploded. (Combination of picking an old wheel with worn rims and the cobble impacts.) A two mile

route march ensued, in socks, to an Oudenaarde bike shop for a formulae one style wheel change.

Minus the now shredded socks, I re-joined the sportive as a solo agent and went for it.  In the footsteps of Merckx and Kelly, I had to proudly shoulder my bike over two of the cobbled hills too. The Koppenberg and the Taaienberg. The sheer numbers of cyclist, crashes, falls, slips, human dead ends made it impossible to safely cycle up.

The worst hill, the Paterberg, I did managed to cycle up the 22% cobbled hill with no problem because there was less cyclists on it at the time. The 2.2k, max 11.6% gradient Oude Kwaremont has the nastiest of cobbles especially the top half on the left. At this stage the poor old snail was sliding on the razor blade using his gonads as brakes!

The only consolation was there was only the Paterberg to go. The eight mile run in was electrifying; I averaged 25mph with 28mph on the last kilometre. At the finish, met up with my mate, who was waiting for me for about 25 minutes. Considering all the trials and tribulations, not bad after all.

Both Trigger fingers and thumbs still suffering but getting better.

Tour of Flanders, day at the races! There's nothing better than being a spectator of one of the greatest Cycle Classics on earth. Today is National party day in Belgium. Everybody comes out to celebrate this monument of cycling. In the morning, we went to Oudenaarde square to visit the Tour of Flanders Museum and then to see the girls sign on and watch them depart. We then headed out to the Oude Kwaremont to see the racing. As usual, the pro races and atmosphere was very exciting.

The men passed by three times and the ladies once. Cancellara attack and bridging to the two Belgians was witnessed in person.