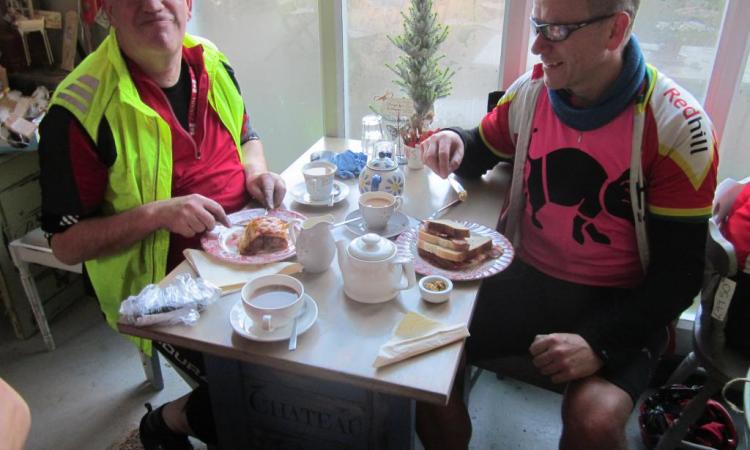 Of course you do Richard.  You’ve just ridden 23 miles and that nasty second group ride leader took you up a big hill, when an easy ride was promised on the website.  And you had an inner tube failure to boot.

With sun symbols all over the weather maps, a good turnout should have been expected, and so it was and as we turned out of the ‘Drome,  I counted 12 folks following behind.  I dropped back to split the group up and leave the ever helpful Andy G to shepherd a second group a hundred yards or so behind.  And so we headed off for an easy ride to Chiddingstone.

Andy suggested the front group should head off and leave him to follow on to Chiddingstone with the second group including Richard after his flat had been fixed. Good new plan.

A trouble-free ride for group 1 in the wan winter sunshine, and we took in the lovely wintery views on route to Chiddingstone.  At the tea rooms we tucked into bacon sarnies and mince pies and waited, and waited, and waited. As we were finishing, group 2 appeared, apparently having ridden to a higher elevation (presumably to get some better views).

Altogether again for the much faster ride back via Lingfield helped by a tail wind and lots of volunteers riding on the front (probably taking pity on me because I had been working all week). Thank you all and thanks of course to Andy G for all his help.

43 miles and not just the first ride in about 5 weeks when we haven’t been rained on, but also a brilliant winter’s day for a nice easy ride in the countryside.