This is Heaven, This is Hell, This is Paris Roubaix 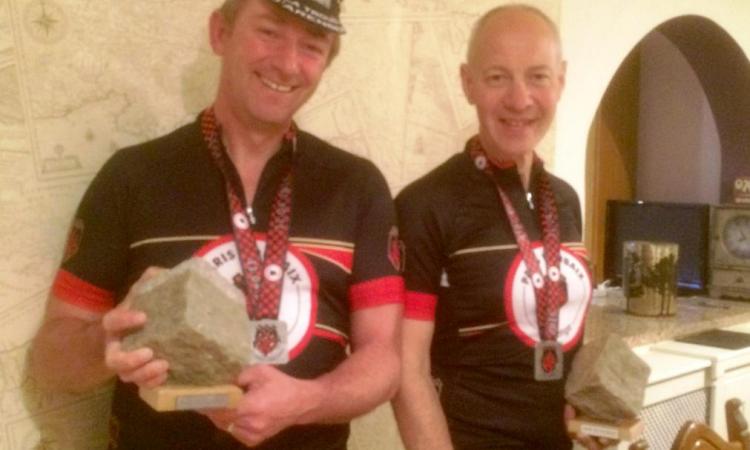 The Paris-Roubaix (l'enfer du Nord – Hell of the North) is one of the oldest cycle races of the professional road cycling calendar. It was first run in 1896. It starts at Compiègne (about 85 kilometres north-east from Paris centre) and finishes in Roubaix’s old Jean Stablinski velodrome. Famous for its rough terrain and cobblestone, which is maintained by local volunteers, it is one of the 'Monuments' or classics of the European professional cycling calendar.

There are 27 cobbles sections included in the race totalling 54 km. Three of them considered to be of maximum difficulty. As well as the famous Trouée d'Arenberg, other difficult sections include the 3000m Mons-en-Pévèle (after 213 km) and the 2100m Le Carrefour de l’Arbre (at 244 km) — often decisive in the final kilometres of the race.

Over Christmas last year, I convinced Stuart Greig (who was plied with wine at the time) to accompany me, in order to complete the course one day ahead of the pros. The “Paris Roubaix Challenge” sportive is a 150k variation of the pro race starting in Roubaix and taking in the final 18 sections of the cobbles.

Following an afternoon’s trip via the Euro shuttle, we pitched up on Friday evening at the salubrious F1 Hotel in Roubaix, and proceeded to pummel the mattresses into a stationary submission.

The registration walk to the velodrome introduced us to the delights and local customs of its inhabitants. Battered cars, drug dealing, run down districts on the one hand which contrasted totally with the architectural splendour and ambiance of town centre and squares.

On the morning of the sportive, we lathered up the bib shorts and laid a snail trail from the hotel breakfast table to the start line in Roubaix.  The weather was proper for a classic but concentrated the mind on the dangers of wet granite setts and the Flanders winds. Lots of people were doing the sportive on mountain bikes but Stuart and I, keen to emulate our heroes (Kelly won it twice), elected to use our adaptive road bikes.

The bikes had special 25mm Vittoria thick robust Roubaix tyres pumped up at 80psi (balance between comfort over the cobbles and pinch puncture risks), taped up bottle cages apexes in order to keep water bottles secure, no saddle bags (As they would wear away with the vibration friction) and 5mm thick handle bar tape with gel pads under. Other essentials were: special gel gloves and the importance of keeping the chain tight on the top front ring at all times. All bolts and screws were checked for tightness.

Tackling the cobbles needs speed and endurance. The undercarriage is the least of one’s worries; the hands and arms muscles take the brunt and gradually get soarer and wear you down. Keeping the chain in a standard big ring through the sections also contributes to the general fatigue.

The Arenburg trench is a treacherous and dangerous 2.5k section. The local farmers plough adjacent to the road (If you can call it a road) so there is no cheating. Hitting it reminded me of the old arcade game “asteroids”. Weaving in and out of frontal ongoing spills and mechanicals, occasionally speeding up, to fill an approaching accident gap before someone else cuts you up. The cobbles were so proud that you could not look behind you because you would end up on your ass. Hence I lost contact with Stuart. I had to stop in a safe place and wait, hoping that he was ok.

He appeared eventually, “This is unnatural, how can we be expected to ride on these?” he bawled. If you could cross a bike with a Zimmer frame, that was Stuart’s first reaction to the cobbles. He got a lot better and accepting of his fate as the route progressed. The nature of the cobbles varied on each section. If the local land was tilled recently, then the sections were muddy.

Other sections, such as the “Carrefour de l’Arbre”, the crowns were the only safe areas, and one had to hold your ground and not be bullied off it. We had to really slow down at 90 degree bends on the wet setts or you be off your bike in a jiffy.  Concentration and not worrying about one’s time was the key to finishing this sportive safely. Hence, even though, one could argue that Roubaix is more famous than Flanders, only 5,000 people did the sportive as against 15,000 in Flanders last year.

Finishing on the Velodrome was rewarding and full of relief. We even bought some cobbled trophies as a memento.

[Editor's note... these were Brian's notes that he left at the bottom when he sent the report... I think they are as good a description of the event as the report above so I left them in!

Arrenberg
Stay on cobbles or else
Sapping nature
Wind, flatlands
90 bends
Caravans being set up
Velodrome