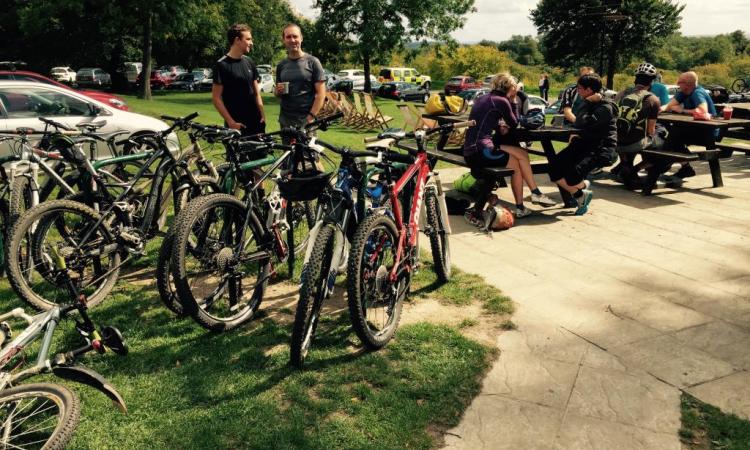 Luckily, the forecast was correct and the rain cleared, the trails were mostly dry and the sun even put in an appearance. Fifteen of us left the car park including new rider Darren, and Conor on his first ride back after 18 months off with a back injury. We poured on the coals and lit up the burners as we headed off over the bridge, past the cattery and the fort, over the motorway, across the golf course towards Headley then along Tye Lane where several people were burying theirselves in the effort to get up the climb. As we came out on to Church Lane we came up behind the first pirate I’ve ever seen on a club ride. Although the “normal person walking my dog” disguise was pretty convincing, the parrot on her shoulder was a dead giveaway. Down Leech Lane, Tot Hill Lane, Tumber Street and up Langley Lane across to Life on Mars. Just three sticks across the trail today and only little ones at that. Bit disappointing really  - I was expecting sticks to be all over the trail like a rash. We turned right at Stane Street and were soon approaching the footslopes of a tricky, chalky climb. According to Strava, the next two mile section down into Ashtead is called Jamie - where’s the beers?. We did see Jamie at Bike Beans Cafe but still no beers. As we approached the cafe everyone was licking their lips at the thought of the cake to come and we weren’t disappointed. There were a few murmurs about how we’d get back too early so I planned an optional extension. Dragging ourselves away from coffee, tea and cake (coffee, cake AND putting a bacon sandwich to the sword for one of us) we went up Ronnie Corbett’s House to 30AB Run. No sign of Ronnie. We were dancing on the pedals as we made our way up Derby Climb and on to Walton on the Hill. After Hole in One I offered my extra hour extension but there were no takers so we went straight back to Reigate Hill. On the way Graham peeled off for home and raced away towards the chalky track down Reigate Hill in his inimitable flat, crouching style.

In honour of the Tour of Britain we’re playing Hugh (National Treasure) Porter bingo - see how many Porterisms you can spot. I had considered Rob Warner bingo but thought it wouldn’t get past the censor.