Let the sun shine in. 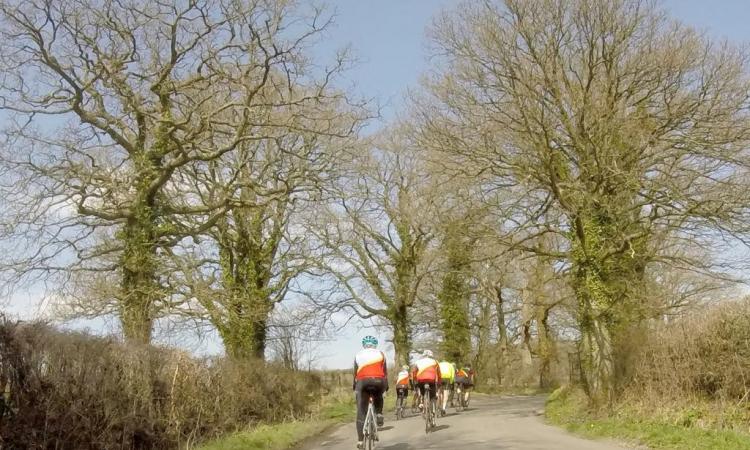 There were a lot of riders at the ‘Drome on what promised to be a great Spring day, but nevertheless,  15 people opting to join the G2 was still a big surprise.

In addition to the G2 regulars, we were joined by newcomer Hamish and guest appearances by Steph and Howard, Francis and Bruce who all had reasons/excuses for wanting a steadier ride than their usual.

Because of the numbers we split the ride, Bruce kindly offered to look after the second group and followed about 200 metres behind.

We took the usual route over to Capel and then turned down the newly, but only partly, resurfaced Weare Street. Definitely curate’s egg, the new bits were great but the unrepaired parts still tricky in places. And then down through Rowhook to Broadbridge Heath. The lanes were beautiful to ride down, the still bare trees allowing both the spring sun to penetrate and us great views unseen in summer when the trees are in leaf.

Stooks café, which with amazing foresight I had chosen as our stop, is easily capable of accommodating such a big group. Indeed, although we were officially far too late for the breakfast menu, they offered to provide our favourite bacon sandwiches anyway. And it seemed a long time since we were last able to bask in such warm sunshine at a tea stop. and indeed, it was a long time that we basked in the sunshine.

Heading home via Horsham and Wimland Lane (which Bruce’s following group managed to reach before the lead group!) and Charlwood, some folk peeled off early and others found some energy for the “sprint” up Kings Mill Lane to the ‘Drome.

The ride (as promised 40+ miles at 14mph) the cake, the warm sun the icing and our “guests” the cherries on top.  Come again, guests are always welcome. Thanks, everyone.