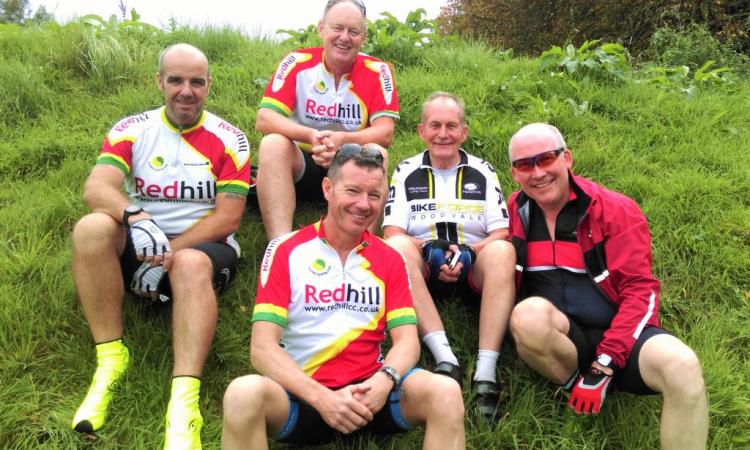 Most riders must have been deterred by the prospect of heavy rain later in the morning, as only 15 or so turned up looking for a ride. The offer of a shortish ride to Four Elms, with a cop-out stop in Lingfield if the rain came early, proved attractive to most and so 11 of us headed off towards Lingfield.

It soon became apparent that we had picked up some extras and had exceeded the desired dozen limit, so I held back part of the group and let the eager beavers from G3/4 pull away and make their own way to the tea stop.

I was planning to go the direct route through Edenbridge, but because the rain was holding off, Frank suggested that we went via Hever Castle to show it to our guest rider Alan from Oz.

When the 6 of us arrived at Four Elms we were expecting to see the place packed out with the faster group, but no sign of them. We assumed they had taken a longer route, but as time passed we surmised that finding Four Elms had been a challenge too far for them.

Photo time with Frank showing off the splendid jersey he had swapped with Alan for an RCC one. I wasn’t too sure that sitting on the damp grass for Frank’s suggested pose was a particularly good idea, but I was happy to take the picture.

Back, the most direct route via Haxted because the clouds were looming and the skies were darkening. However, the rain (light drizzle really) held off until Smallfield and didn’t worsen before we arrived back at the ‘drome.

Sipping a cuppa under the side awning of Pete’s new mobile café, we waited, and waited until eventually, the faster group arrived. They had found “a” tea stop but not “the” tea stop – apparently. Never mind, they too had a good ride. All a little damp but still no sign of the “Heavy Rain”.