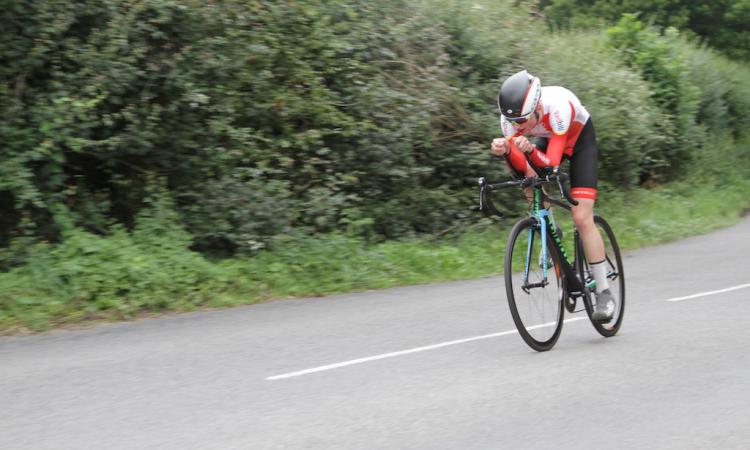 Round 11 of the Summer TT series took place last night and the conditions were calm and warm but high air pressure and a light NNE wind put paid to anyone improving their handicaps times this week.

The main talking point was Matthew Ferguson knocking Matt Peel off top spot by 9 seconds to take both the scratch and the Handicap on the same night. This is hardly ever achieved as those at the speedier end of timings tend to only improve with a handful of seconds over the entire series. So although a second slower than his previous best it was the quickest of the night just pipping Geoff Clifton who was second in that competition on a Boardman Aero Superbike replete with Dura Ace Di2. Geoff very much looked the part testing the shop bike for an upcoming review and I must say it was the best I’ve seen of Geoff on a bike. He really did look great on it.

Newbie Triathlete privateer Mark Jones came to do his first TT and enjoyed his benchmark time of 26:43. Gina Brown, on her own this week with Kimbers absence, road a strong 26:11 and it was good to see Nathan Chamberlain on his 48x15 (84 inches) fixie setting a super 23:32 showing he’s still got the skills.

Third on scratch for the night was the ever present Steve Bryant who is the only rider to have completed in all 11 rounds so far and he also took 5th in the Handicap competition to add to his tally for the year. Alastair Cunningham made his second appearance of the season and took 3rd place in the Handicap dropping only 8 seconds from his previous time.

James Trigg just back from a few weeks in Morzine said he felt a little tiredness in the legs but still managed to take 4th in the scratch and added to his Handicap tally.

Nick Davy and his daughter Madeleine came for the first time this year and in fact Madeleine was riding her first ever TT and managed to break the 25 minute mark at the first time of asking on a road bike. Very impressive. Unfortunately, a puncture put paid to Nick's evening. Russell Hicks and Chris Hewitt made up the Oxted contingent and posted 22:22 and 20:56 respectively.

Next week is an unofficial Interclub with Oxted CC so we need all our super-fast riders please.