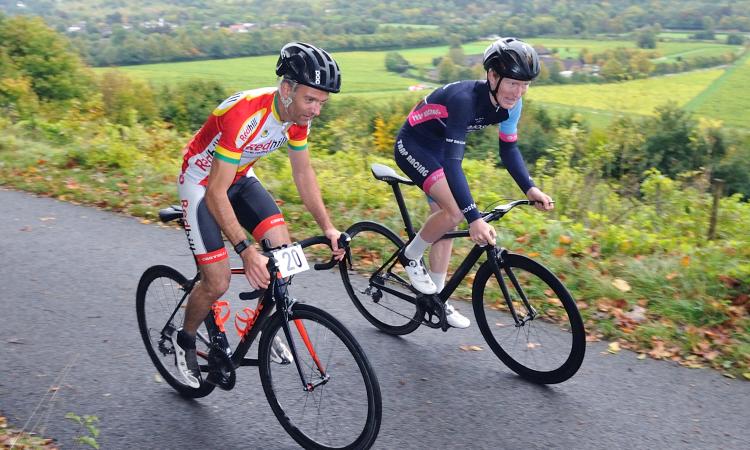 Although there were some DNSs, presumably put off by the biblical weather forecast by the MetOffice on the Friday before, there were 47 starters on what turned out to be a pleasant morning with a temperature of 15C at the start time. Overnight rain did, however, cause some heavy leaf and twig fall under the trees, but energetic sweeping by the marshals soon cleared the line and the course was in good condition for the Duels.

The first round - a timed climb to select the "duelers" for the subsequent knock-out rounds -  produced some very quick times and a new course record by Ben Irving (Taap Racing) at a smidgen over 4 minutes.

Three Redhill riders made it through to the Duels – Ryan Harris, Matthew Ferguson and Daniel Robson. Junior rider Daniel was up against No 3 seed John Hale (Pearson Cycles) and was narrowly beaten in the second. Matthew and Ryan both made it into the Quarter- Finals, Matthew lost however to the No 2 seed, Mark Aldred (KW) and despite challenging very hard, Ryan succumbed in the last 25 metres to the No 1 seed and eventual winner Ben Irving.

Ben, who placed second in 2016, was not only Overall Winner but also Fastest Junior.

The Women’s competition, with sadly only 5 entrants on the day, was dominated by Mathilde Pauls (Sigma Sport WRT), who had clearly warmed up for the event by taking in the Urban Hill Climb the previous day.

Redhill’s strength in depth paid off and enabled Ryan, Matthew and Daniel to beat Pearson CC into second place for the Team Prize.

Most Improved Prize went to one of several RCC juniors, Joshua Golliker on his second try at the event.

The new-for-2017 Fixed/Single Gear category had 3 entrants and was won by Paul Haywood (Epsom CC).

Many thanks to all the marshals who turned out to help make this a successful problem-free event again.

And for the full gallery by Frank Grainger, head to >https://frankgraingerphotographyg.smugmug.com/Denbies-2017/n-DhMpvN