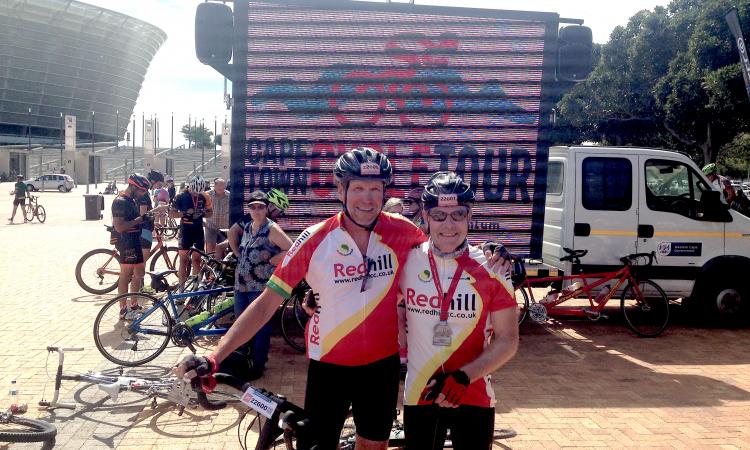 It's become popular for RCC members to spread their wings to South Africa for the Cape Rouleur, The Argus and this year the Cape Town Cycling Tour. Here is Wolfgang's write up of this experience at the Tour this year.

It is 6 o’clock in the morning on Sunday, 11 March when Andrew and I arrive on the Grand Parade, the square in front of the Cape Town City Hall, the place from where Nelson Mandela first addressed the South African nation after his release from prison in 1990. Today and for the first time it is the starting point for the Cape Town Cycle Tour, the world’s largest timed cycling event with 35,000 riders participating. As cycling enthusiasts will know, last year’s race, which would have been the 40thanniversary of the event had to be cancelled because of extremely high winds. I was there last year, I was ready, I have the t-shirt, but it did not happen. So, this time it has to be! It is #40 take2!

Although the sun has started to come up it is still quite dark. Thousands of other riders with us make their way quietly into their starting pens. The silhouette of the Table Mountain is just visible in the background. The relative silence suddenly breaks with some organisational announcement made over the speaker system, then some local dignitaries make some speeches, then the South African national anthem is played, then a short firework, a gunshot and ‘hoopla’ the elite riders are on their way. It is 6.15 now. Very soon after this we are shepherded out of our pen and move slowly forward towards the starting line for our 6.59 race start. International riders like us normally start after 8:00, but a seeding request based on our 2017 London Ride 100 result (5:55,13) gave us this very preferential slot. We did the London Ride 100 under 6 hours - tick, our target for this ride is ‘under 4 hours’. Quite a stretch for us over 60s!

6.59 and we are on our way, 109km with hills and flats ahead of us and a total elevation of 1220m (this is according to the official race stats, Strava gave me 1909m (?!)). The first 12 km are mainly uphill, climbing out of the city centre with very little time to rest. The speed of the riders around us is frightening. We are clearly in a field of very competent cyclists. Against our better judgment (‘take it easy at the beginning, it is a long race!’) we decide to go with the field and try to keep up rather than climbing alone into the headwind. We know that after the climb it is a 12km steady downhill on a motorway. ‘Let’s dig in now and take that as a rest.’ Very quickly we find out that we worked on wrong assumptions. Having hung on to the top of the hill, on the crest the whole field starts to accelerate explosively to make the most of the downhill ahead. Same decision to take: try to hang on or cycle alone. We decide to hang on and now it gets really scary. In a tight pack of riders, we take the long downhill stretch with speeds of sometimes way over 70km/h.

The motorway ends and a sign on the side says ‘85km to go’. We look at each other and both think the same ‘my legs are knackered, where the heck can we get the energy from to get to the end. Have we overcooked?’.

Nevertheless, we dig in and keep it going as good as we can. The next stretch is along the coast, through little towns and the Cape Nature Reserve. We get into a good rhythm and somehow keep up the speed jumping from bunch to bunch depending on what speed we are able to maintain.

The sun is now up and more and more people gather along the streets to cheer on the riders. There is R&B live music at Kalk Bay and Fish Hoek, techno at Red Hill corner (yes, you read correctly: Red Hill is featuring on this ride. It is a well-known junction near an informal settlement called Red Hill near the Cape Nature Reserve) and African gospel music along the township of Masiphumelele. We even have a Borat impersonator in the famous swim suit near Simon’s Town shouting at us ‘Great energy Red Bull, err, I mean Redhill’. It seems as if the whole of Cape Town is out to celebrate the ride. We have everything from kids begging riders for sweets or water bottles near the coloured and black communities to people sipping Champagne on their terraces in Camps Bay.

With 35km still to go we still have the two biggest climbs of the day ahead of us, the famous Chapman’s Peak, an iconic coastal stretch with a long scenic double climb along a narrow winding road up and down and Suikerbossie a long straight climb up the hill just 20 km before the finish.

By this time, we are just digging deeper and deeper trying to keep up the speed uphill as good as we can and using our biking skills accumulated from extensive mountainbiking to descend as fast as possible through the winding coastal roads.

Once the Suikerbossie climb is done and only 14km to go, we know we will be able to finish and beat our target of 4 hours. We agree that we should take it easy now but somehow the adrenaline still pushes us forward and we finish the last stretch in good racing speed only to slow down on the last few hundred meters to make sure we make it side-by-side and arm-around-each-others-shoulder over the finishing line. It always makes a great photo and this time it also gets us an acknowledgement from the race commentator: ‘….and here are the Redhill boys, crossing the line arm in arm – great style!’

After the line, a quick check of the race time: 3:43! Yes, we did it! Sub-4, target achieved! Quick computation: this is an average speed of 29.25km/h. The fastest ride we ever did! We are happy!

We receive our medals and next a Marshall comments on our Redhill jerseys and tells us that he was born close to Redhill and lived a long time in Dorking. Just before he could start launching into more details of his life story a guy in a Maison du Velo shirt comes up to us and tells us that he also lives in Redhill. As a result, we have nice chats and photos together. It is almost like ‘wear a Redhill shirt and you make friends all over the world’.

All in all it was a wonderful experience and we can only recommend to anybody who has the chance to participate in this race to do it. It is an amazingly beautiful ride, with incredibly friendly people cheering you on all the way.  South Africa, the rainbow nation will show all its wonderful colourful facets to you.

One last thought. When we checked Strava after the race – as one does – we discovered that we had another Redhill CC rider in the field, Strava name ’simon w’.  We don’t know ‘simon w’, but it would have been great to have met before and after the race to compare notes and share stories. What about introducing a section to the RCC website in which members can note to which major cycling events they have signed up. Could be good to build up further club spirit and camaraderie.