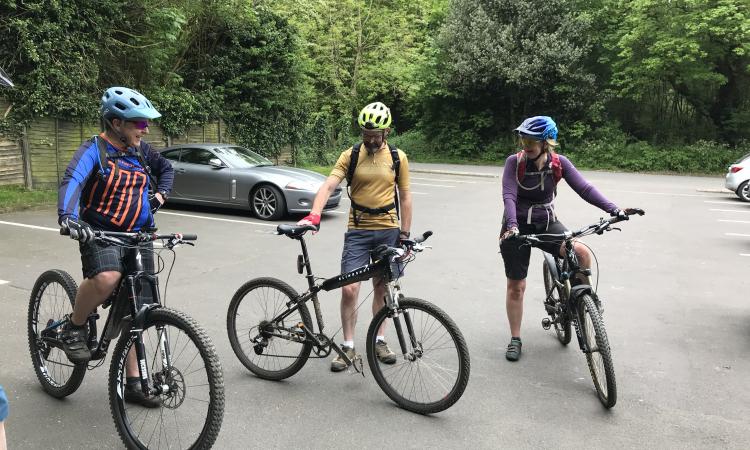 Six of us including new rider Tim gathered in Bletchingley Village Hall car park and were just about to set off when the late Dave R joined us. We had gone 50 yards down the road when the very very late Graham pulled up alongside me in his car and said that he would catch us up on the way. That’s when I noticed that the very late Bruce had also joined us on his Very Interesting Bike (more on that later). We headed up the North Downs and stopped at the Harrow car park to wait for Graham. This gave us time to have a proper look at Bruce’s bike. It’s a Slingshot Fold-Tech whose most distinctive feature is that the downtube has been replaced by a steel cable and a spring. It’s also a folder. A few links here if you want to know more:

Graham arrived, and we carried on down Willey Lane, past the Fox and on to Happy Valley. The amazingly brilliant descent of Badger Table Tops brought us to an early tea stop at the Poppy Café in Coulsdon. Up the hill across Farthing Down then through the woods to Doctor’s Lane and up Willey Broom Lane, across Six Brothers Field and back towards War Coppice Road. Down Hextalls, past Kitchen Copse and on to Bletchingley via Stychens Lane. At 16 miles this was shorter than usual but I wanted to get back before the rain and we arrived at the car park just as the first drops were falling. The rest of the day was a total washout..