Mtb TT with Stuart B 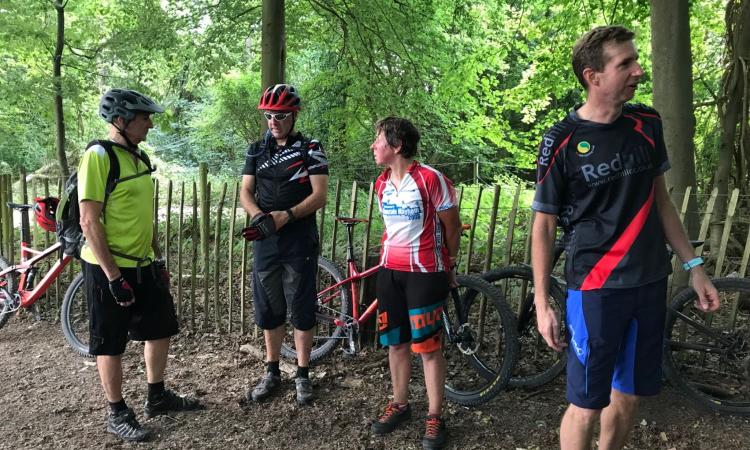 So after last years successful Mountain Bike TT in Peaslake, Jim and I were talking about something nearer to our "home".

There's not much at the top of Reigate Hill that would have climbs, low public traffic, downhill/single track and be easily loopable.  So our home location was out.

After looking at a new single track that's opened up this summer on the back Mickleham Downs it seemed we'd found something that fitted the bill.  Existing well known single track + this new one, relatively low number of walkers (and it's rare to find a horse).  But not quite as well know to all, we did have some challenges with going wrong and even losing someone!  4.7miles long., so a little shorter than hoped, but a couple of big hills to challenge those legs instead.

After the ride leader turned up late, because he didn't know his own start instructions, we were off.  15 were ready to see if they could go fastest on the dry and very loose loop.

1st Lap was a familiarisation.  Lots of people know all parts, but not in the MTB TT Loop.  Slow first lap with lots of stops to remind people of the turns and direction.  From the car park into first part of Life on Mars, into the new single track (no name yet), out only Stane Street and over the hill to Juniper Hall descent and then Tank Slapper, back up Juniper hill via the chalky Stane Street and onto Mickleham downs, the finall left again onto full Life on Mars 2, right at the golf course on the bridle way back to the start.

2nd Lap was a free for all.  Lots little private races here and there.  Gradually all came back in time, blowing and puffinh, lots of comments about being able to shave time off as they went wrong here or there.  Several comments about turning up on a lighter bike of some sort!

Photo shamelessly nicked from Julian as I am useless at write ups!

If you are on Strava the segment (use Segment Search) is called "Redhill MTB TT 2018" so you can try it out and compare.

The GPX FILE IS AVAILABLE ON THE FRONT PAGE OF THE RCC WEBSITE IN THE LATEST ROUTES.