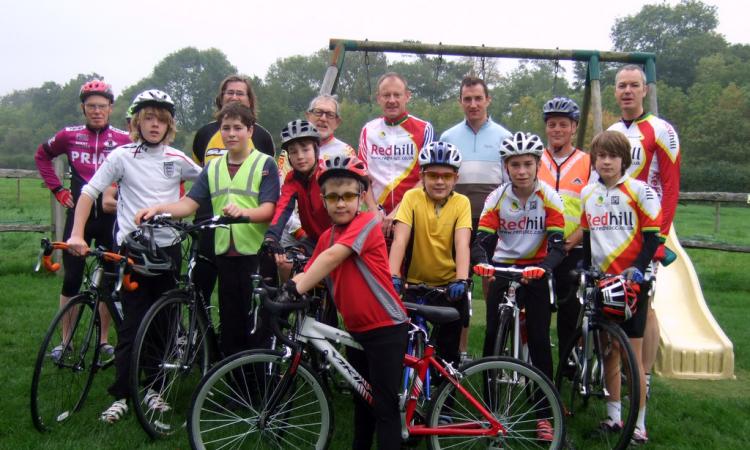 I've seen the future - and it was on the inaugural G-Zero ride from Woodhatch Park where seven young lads rode out on a typical G1 route and averaged a whisker under 14mph for 23miles in style.

For some time we've known that there are strong riders being nurtured through the Raiders but this was the first time we've integrated a Raiders and main club ride out. The G0. And with these seven plus dads gave us one of the biggest turnouts I've ever seen - and this with Mark Vincent's ride for Brighton having left half an hour earlier. 70 riders? Can't have been far off.

But these boys were something else.

We took the route out to Leigh, across by the church and then left into Partridge Lane. I had started the ride gently but clearly there was hunger, there was appetite.... there were lads used to racing and doing very well.

So a small peloton of five of us set off with three minutes head start up the drag towards the house with the witty sign 'Rest of the World' outside.

It was on this long drag that I had my revelation in the shape of the Pullen Brothers. Brimming with enthusiasm and every prospect of becoming fantastic riders in the future (someone note I said that when the 2020 Olympics come round!)

Ben Pullen, 10 years old, stayed with me ascending the drag upwards at nearly 15mph and had enough strength as it leveled for a sprint at 18+mph to reach the Rest of the World staying ahead of nearly all the chasing pack. Freddie Roux and Dad Andre overhauled us with around 40 yards to go. But chapeau young Ben.

For the next few miles to Tanhouse teastop, Freddie Roux, George Sales and the Pullens kept the pace nice and high. A few dads sweating in the pack!

After tea, we avoid Newdigate with a detour round Hogspudding Lane then a few more sprints up the inclines to the Surrey Oaks. At Gadbrook Road another sprint with a bunch including the second Freddie (sorry didn't catch your surname) who was strong all morning.

Finally, up Snowerhill, past Wonham Deer Park and Trumpets Hill as a Ferrero Rocher to end the ride.

It didn't just feel like a proper club ride, it was a proper club ride.  We can be hugely proud that such fantastic young cyclists are coming up through the Raiders and can now ride out with the main club regularly.

A few final special mentions - to Dougie and Nat - who rode strongly and sensibly with Nat experiencing a small muscle pull towards the end. To Tim Sales and Graham Haysom for backmarking and encouragement. To Andre Roux for witty banter as ever... and of course to John Leitch who has managed to help train such prodigious talent within RCC's junior ranks via the Raiders.

I for one can't wait until next month's G0.