Bakers Dozen head off to Cranleigh 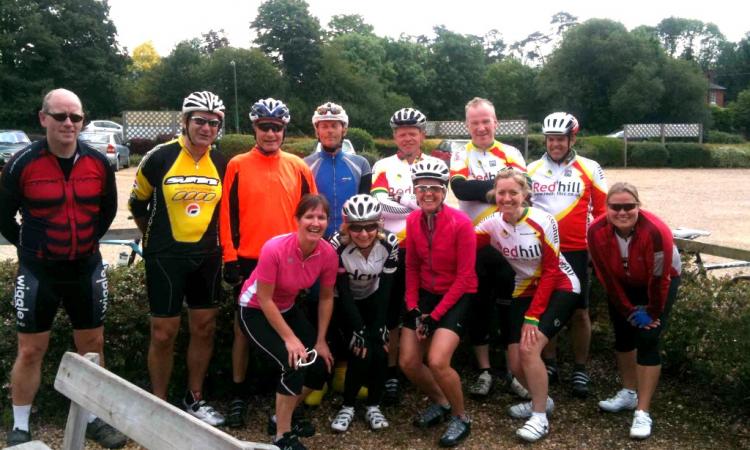 Thirteen people including myself signed up for the ride and we set off. Simon M, Katie , Andy G, Sally Ann, Alison F, Alan K, Phil K, Paul W, Jane F, Liz L, myself, André Roux and Nick Curran. I believe some riders had just stepped up from G1 and were worried about the distance, but they needn’t have as they all coped admirably. From the aerodrome we headed past Woodhatch, Leigh, Newdigate, Capel and down Weare Street which is always a pleasure.
I was worried about the riders who had expressed concern over the distance but as we rode in a reasonably tight line, rather than moans and groans and wheezing I heard laughter! Lots of Laughter! André, who had offered to backmark, was holding court and delivering a pretty convincing stand-up routine!
We stopped at Nottcutt’s Garden Centre for a well deserved cuppa and cake. As the weather held off we were able to sit outside which was a bonus as was further entertainment from André.
We took a more direct route back as I didn’t want to be too late and was desperate to keep it under 50 miles. Thanks to Nick for some sound route advice!
All in all a very enjoyable ride. Challenging enough at nearly 50miles but not eyeballs out and as I mentioned, everyone coped. A few people stuck around for another tea or lunch at the aerodrome cafe which is a great way to wind down if you have the time!
49.5miles at 14.7mph.
Kevin