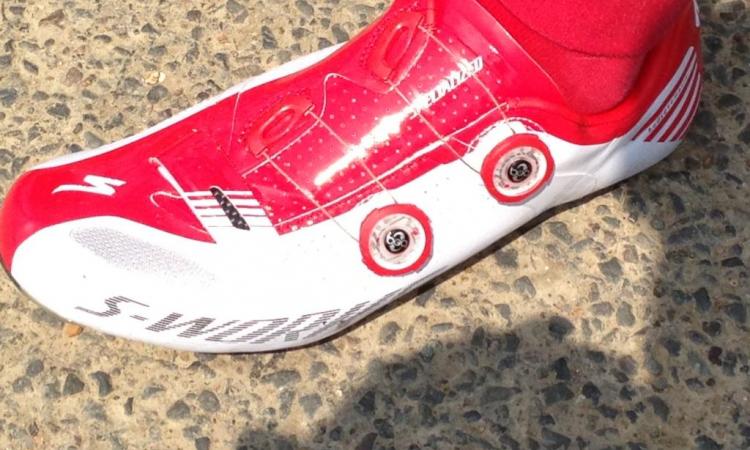 Rob Neal, Clive Lucy & Ian Taylor were all present & correct as the Garmin clock clicked over to 9am.The only one missing from roll call was my Big sis Sal who had had trouble easing herself out of bed. I called time on what promised to be a great social ride with great banter to suit. But alas, stopped in my tracks by a worried looking Taylor who pointed to the top of the Car park where Lord Dyson of Banstead was polishing his new 'Dorothy' shoes for the first time.

Five minutes of polishing allowed the rest of us to affix our sun shades -clearly needed for the fantastic sun that had been bestowed on us - before the newly christened 'Dorothy Dyson' rode down to join us almost causing the assembled crowd to be blinded by the size 'boat' footwear.

As ride leader I acted quickly and phoned Air traffic control to let them know that it wasn't a trackside fire but 'Dorothy's' new shoes and they were safe to open the runaway again.

This late departure allowed Amir 'I've only ridden my bike 3 times' Khan to join the 6 strong team and head south towards Ditchling.

At Outwood we crossed the Reigate Sportive and found the lonely RCC shirt of Dave Townsend who was feeling the effects of a little too much Saturday night indulgent!

A steady pace to Turners Hill where Ian Taylor remembered he had to work Monday and perhaps turning back now would ensure he wasn't late! The depleted team pushed on through Ardingly before turning left and heading through the lovely Sussex Countryside.

Six miles north of Lewes and realising that all were getting low of fluids a short cut was needed! Luckily having Dorothy Dyson of large map fame I quietly asked if he could lead us to our destination, to which Clive (aka the Tin Man) retorted 'follow the yellow brick road Dorothy'. A large detour later (on purpose Im sure) we rolled into Ditchling with just under 40 miles on the clock.

To our delighted Sal had managed to climb her way out of bed and roll down Ditchling Beacon in time for a much needed a 'carb loading' session. The team was back to full strength once more!

Poached eggs, followed by cake, coffee & coke seemed the order of the day. Over the cake Amir let slip that whilst he's a relative new comer to riding he had run a marathon or two and hence why he was pushing the pace up front with Dorothy!

Turning east through Hassocks before heading north through Cuckfield (adding an extra hill courtesy of Garmin connect-sorry chaps) Ansty Balcombe before the final climb of Back Lane up to Turners Hill where we split. I headed for home Sal turned south in search for Ditchling once more. Whilst the rest headed down Old Hollow and back to the Drome.

We managed to hit the 70 mile mark with around 3500ft of climbing, 116 shoe polishes from Dorothy. More importantly all back safe and a fun time by all!