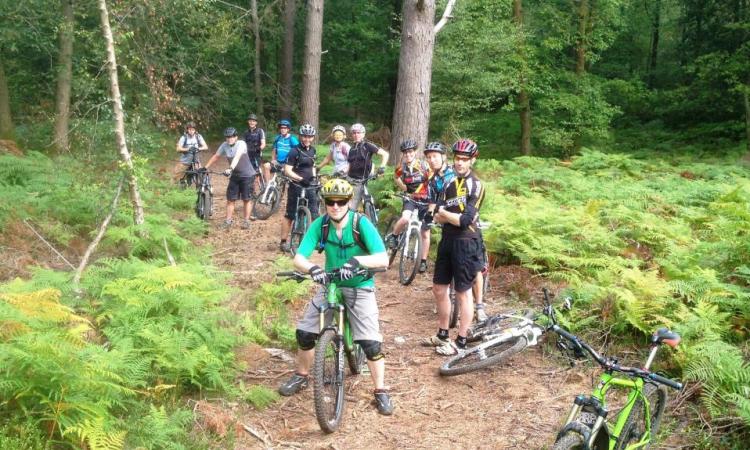 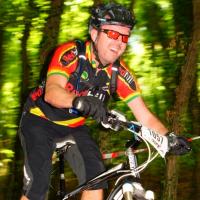 Adequately supported by 11 riders we departed the car park at Gomshall, through the village of Shere and headed up our first big climb of the day alongside Combe lane and up to Hollister farm

Graham Brash was showing off his newly sewn up lip from the big of experience. Starting from the back our over 60’s retiree rider, sporting a white helmet complete with UCI world championship rainbow flashes, was picking off the team one by one as he showed off his hill climbing skills developed during the working week - which he now claims as leisure time.

Many of the Ride 100 riders (from 2013) will be familiar with the hill climbs in this area. Few would be familiar with the off road down-hill trails tucked away in the woods just to the side of the road. We found our way down ‘White Down Lane’. A section of Steep bomb holes and sweeping fast trails traversing the narrow lanes of the surrey hills lay ahead. Alarm bells rang. I thought a few quiet words of warning and encouragement were needed before we started. A look over my shoulder and there was Graham off over the first steep drop, seat up. Too late, he was gone into the distance. Only the cheers of excitement in the distance let us know he was OK. He then cycled back up the hill for the update.

We found our way round the course in one piece, what a treat.

From here it was the familiar trails through Abinger Bottom and up to Holmbury hill. The late summer sun was shining; the air warm, Banter in full flow and the day was starting to turn into one of those rides you just don’t forget in a hurry.

With ‘Barry knows’ best to look forward to before a tea break at Peaselake we headed down from the tip of Holmbury across some less familiar trails. Full speed ahead looking like Danny Heart on Speed - Honest. Graham by now having exhausted all prowesses in the Down Hill and UP Hill department was thinking ahead to the tea stop. Requests were made for a good gold rim and some china made from Bone.

From here it was back to Shere via a cute loop through winter fold woods. Graham was at the back by now having overcooked the first leg & the bike thrashed to the extent the wheels were coming off. There was evidence of water presence in the trails as we followed the lines of winter streams. Not a favourite for the occasional off roadie rider, loose grip on the bars required push back and let it go. The ford crossings in the village were in full flow, again graham had exhausted his skills earlier in the day and chose the footbridge whilst the team gained a free bike wash

And there it was. All headed back to the Gomshall Mill for a quiet beverage and reflection on what appeared to be a well received ride – Well planned, expertly executed

Thanks to our JC at the back