Award Winners Shine on a Night of Hills & Celebrations 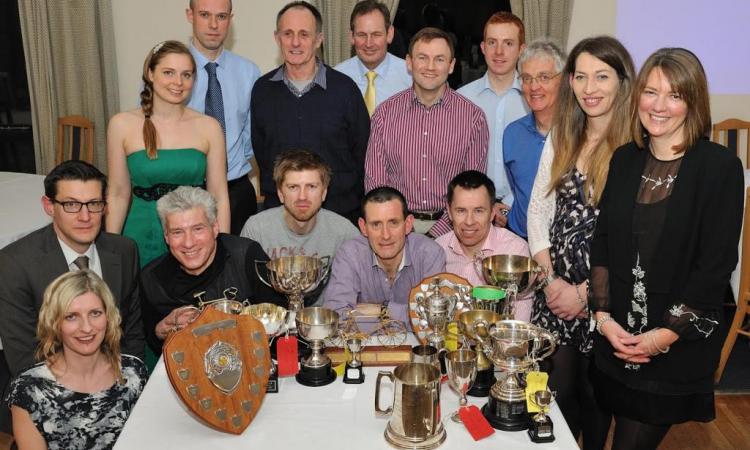 The annual awards is a chance for riders - and often long-suffering other-halves - to assemble for plenty of chatter and a look back at the highlights of the year past.

It was fabulous to see a full mix of members from the steadiest G groups to a fine off-road contingent alongside our Time Trial and Race stars.  The food and service from Bletchingley GC could not have been better adding to a fun evening for all.

Over dessert, Simon Warren described the life of a 'climb bagger' who spends his holidays touring Europe and ascending four major climbs a day as his family wait in the car at the top of the Alpe D'huez and Col d'Aspin's of this world. He then went on to help us present the winners.

A few to note particularly:

The Hospital Trophy was shared by Stuart Nash and Clive Lucy after their misfortunes last February. Both were back in the saddle after three months and if ever there was a testament to love of cycling and not letting injury hold you back... these two are it. Later in the evening, they also jointly shared the most improved G4 riders award. So, etched together in history!

The John Revill trophy for the club's most active member this year went deservedly to Kimberley Anderson who has been idefatigable in her participation in and support of RCC events. Riding, marshaling, assisting commissaires, TTs - you name it, Kimbers has been there. A particular cheer went up for this one. And we shouldn't forget she's also an enthusiastic MTB rider too!

Peter's Golden Bicycle - for endurance cycling - was rightly awarded to Howard Dyson who endured the entire route of the Tour de France one week before the professionals often putting in 12 hour days in the saddle despite injuries obtained in a prang early on.

The La Sourdine trophy, which celebrates achievement in foreign sportives went to Mark Edwards. Mark along with Julian Paphitis completed the toughest of all european MTB races at the Grand Raid... 79 miles with over 16,000ft of climbing... some of it at gradients of 40% where carrying/dragging the bike was the only option!

And the most improved Cat 4 racer gong went to Cat Gaskell, carrying the flag for women's racing at RCC with her competitive spirit and top 10 results last year. While Dom Clegg, now racing for Paceline RT, joined us for the evening to collect both the hill climb trophy and the Road Race Champion.

On the TT front, Brian Hennessey, in the year he's likely to be moving to Cornwall and bidding farewell picked up a number of gongs including the Senior Best All Rounder, while David Motton took two trophies and Matt Peel, the RCC scratch trophy, with Will Henton picking up the Handicap trophy.

Finally, RCC awarded two Good Fellowship Awards this year... one for road and one for MTB, both decided by the votes of members. The winner for Road was Rick Gregory and for MTB Gwyn Williams - both as deserved winners as one could hope to find!

Thanks to everyone who came along to make it a great evening. Hopefully more of you next year to celebrate the cream of RCC from G1 to the pick of the best.

G trophies for most improved riders