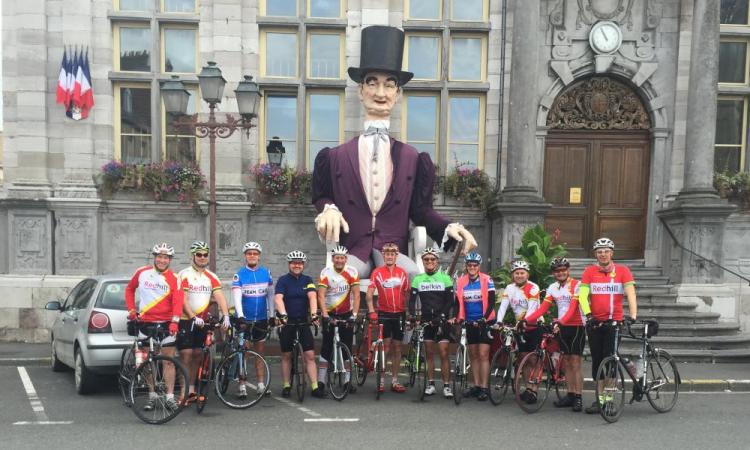 This was the 5th visit by RCC to the Hotel Meurice in Calais for a weekend of cycling in Haute Normandie and - despite the absence of our Calais organiser and talisman, Mike O - it ranked as one of the best yet thanks to good conditions, silly-headwind-free conditions, excellent food and great company.

Stories of Calais being over-run with rampaging migrants turned out to be entirely false. Although perhaps the fear of such things did make the town seem much quieter this time. Certainly, for many of us, the Eurotunnel crossing had never been so easy.

At the Hotel Meurice, time has stood still as ever except in respect of the food which had improved even on the high standards of the previous year. We secured a table for a dozen in the restaurant and were treated to fayre that would receive accolades in London. The bar did run out of both glasses and beer at one point but that seemed to be more to do with a strange stand-off between the Hotel and its own restaurant when it came to glassware.

The food highlights continued on the first day of cycling with massively improved nosh on offer. Cooked breakfasts, fruit salads, cheeses, cereals... just superb and much needed for the day ahead.

There was some talk of changing the traditional Saturday route but we didn't. We know the route to Etaples, we know the coffee/lunch/ice-cream stops and we know it's a challenging and fun ride so we rolled with it.

26 rolling miles out to Samer where the patisserie and coffee shop were both pleased to see us and accommodating. We raised out Grand Cremes to another year passing and Martin attempted the Mike O "cream on the nose" photo with his unfeasibly large eclair.

The weather wasn't sunny and it wasn't warm - but it really didn't rain at all despite the forecasts and it was still OK for bare arms and legs. After Samer we climbed up to the rolling road that drops down to Montreuil. A mild headwind made for somewhat more effort than in previous years but we knew we'd reap the benefits on the way back up the coast road so everyone was more than happy with the effort.

The road from Montreuil to Etaples is a quick and pleasant snake towards the coast and we were rewarded on arrival at the Aux View Port restaurant with greetings that you'd give to old friends. They remembered us, they set up our 'usual' table and served up a superb lunch. The only challenge was that everyone felt like 40 winks at that stage. I suspect if they had put a few duvets out, kips would have been taken.... but no, we remounted and headed for Boulogne.

Cycling from Boulogne back to Calais can be horrid. The first year of this trip saw hail and killer headwinds. Today, it wasn't horrid. In fact, it was quite nice. A slight tailwind and superb steady riding from a very evenly matched group helped the miles fly by and we flew through Ambleteuse towards the ice-cream stop discovered by Caroline D the year before. Boy was she happy to see us... and totally unflustered by a dozen cyclists invading her tiny ice-cream and crepe palace seeking different permutations of Speculoos, Cafe, Pistache and Rose scoops.

The final push saw the quicker group incorporating 'smooth as silk' Geoff, Nasher, Phil Gibson showing what 900,000 miles of cycling a year does for your fitness, Clive, Martin, unstoppable Irene, Gadget Dave and Ro blast off towards the Cap Blanc Nez climb. Every year, the long drag up Cap Gris Nez comes as a leg-sapping suprise followed as it is by the most serious ascent of the day. We hear that Martin 'let Geoff have it' in the sense that Martin could of course have been KOM (cough, cough, cough) but apparently the gap was some 30 yards by the top and as ever, Geoff was only nose-breathing.

We gathered for the photo, legs tired but no-one exhausted and did the fast return into Calais. Yours truly ended up having a short slide along the tarmac some 500 yards from the hotel thanks to a huge bump in a cycle lane that knocked bars from hands but with the excellent ministrations of Francis and Dave B, all was well.

Back at the Meurice, the beers were flowing nicely, there were enough stories to last an evening and Dave on his first ever Calais trip waxed lyrical about the joys of cycling with a nice fit bunch on such a gastronomic and be-spoked adventure. 89 miles at an average between 16 and 17mph depending.

Sunday it was meant to rain. It didn't really. Certainly there were showers in the night and perhaps even one while we ate breakfast but the forecast was for a downpour just after lunch so we decided (wisely as it turned out) to make it more of a Club Run ride. 30 miles to the walled town of Bergues for tea and crepes, 30 miles back and lunch in Calais. We have Martin to thank for the germ of the idea as it worked ideally.

Working north from Calais, you're treated with long snaking roads with miles between junctions, good visibility and good road surface. Also the total climbing is less than 100 ft. Flat as the crepes we tucked into. There was no wind at all... so with organised riding - at speeds ranging from 17mph - 24mph while still being able to chat in whole paragraphs - we got to lovely Bergues in double quick time.

The square features a giant man in a bowler hat (not a real man) looking somewhat like Benjamin Franklin. We didn't bother to find out who he was because Francis negotiated places at a charming Crepe and Waffle establishment so we took our seats quickly, literally full of the joys of Autumn. Happy chatter... and while the staff wrested with Martin's chantilly pimp-my-waffle requests, the rest of us hatched a plan.

Gadget Dave was well en route to one of his fastest ever averages. We decided to work to allow him to beat it comprehensively. The plan involved a disciplined (but still sociable) rotating chaingang that - with the superb conditions - could likely enable an average of near 20mph to be maintained for much of the way. As Martin extrapolated, just a minute of real effort for each rider at the front before dropping back into the warm bosom of the bunch and working round.

What followed was about as tidy and disciplined an example of group riding as you'll ever see at a club or team anywhere. The roads flew by and we clocked a few admiring glances from French Sunday riders as the Redhill train swept smoothly by.

Dave kept giving us updates... in increments of 0.1mph average as it crept up inexorably. By 7 miles out, legs were all a bit tired but with a final push through the suburbs of Calais he pushed the stop button with exactly 60 miles and an average close to 19mph on the Garmin. The descent into the Meurice garage was awash with smiles. A superb morning riding and a chance for everyone to talk to everyone while winding in the miles. If only we could reproduce that every week!?

The restaurant we were recommended for lunch in the Square couldn't accommodate us but no matter. We had the Ambassador (AKA Francis) who took us to the superb Coq D'or... it didn't look great but it was. Beer, amuses bouches, excellent main courses, discrete service and tales aplenty.

So that, folks, was Calais 2015 and it was as inexpensive, high quality and super riding a weekend as you could ever hope for. Thanks to all the participants. I suspect we will all be back again next year!