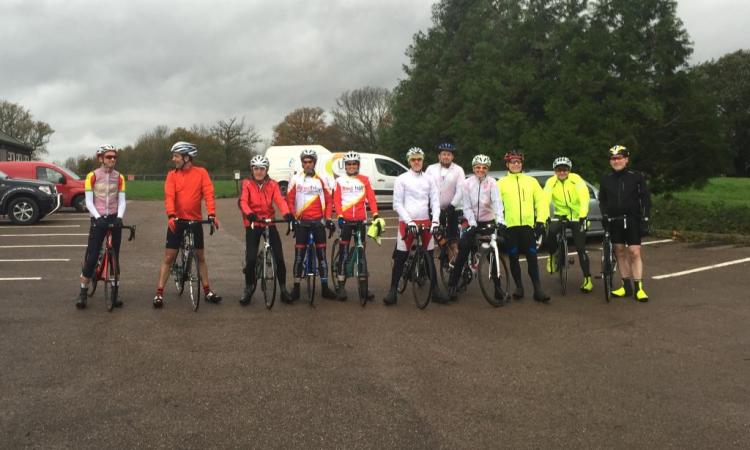 The 9am weather was much nicer than the dreadful conditions predicted by the forecasters... and that was enough to tempt 13 folk out to the Drome, knowing full well that they faced at best a thorough test of their wind and wet gear.

Everyone but the quick three (Kieran, Alan and Lottie) joined forces with Rick's alternative circle to Tanhouse. A merry bunch. We headed out in windy but dryish conditions and it was only after Lambs Green that the heavens opened. And then they really did open! My how we laughed at our early optimism.

No matter, Tanhouse was warm and appeared to be patronised by similarly sheltering groups from Addiscombe and Crawley Wheelers. All watching the wind build and the rain lash.

We all knew at some point we had to remount the steeds and put our teeth to the wind but fortunately, it was not the teeth but the backsides... a tail wind blew us the short distance home to at least feel righteous after hot showers.  Thank you to Rick for tacking on the 'first left turn at Charlwood' and 'Wimlands Lane' detours to the usual Tanhouse loop.

Not many miles at an insignificant average but very enjoyable.