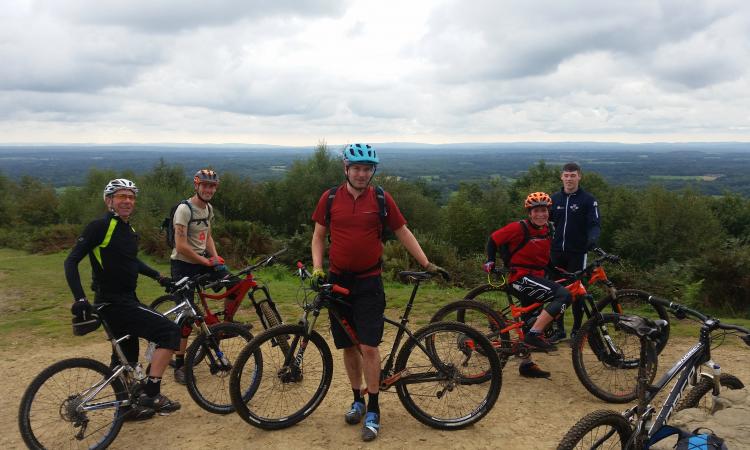 6 of us descended on Holmbury again for the Redhill MTB TT loop.  4 regulars, but also Mark (a newbie from week before) and Jordan (newbie this week).  I was really worried that I would lose them somewhere and neither are regulars to the trails!  That wouldn't go down well with the Redhill MTB CC bosses!

A slow run round the 8.6km loop showed everyone where the relevant route went and in particular the turns.  A great day for mounatin biking, weather not too bad, dry-ish and not that busy.  A slow pace that didn't kill all our legs, but shows the the ground was softer than the summer, so this was going to be hard.

Our second run was made at a "race" pace where all the riders could go off at their pace (though we left James behind to follow up after having his breakfast bap - food of champions I'm told).  Good runs around the three major single tracks - Yoghurt Pots, Telegraph and Barry's Knows Best all surfaces running OK after no doubt hundreds of summer cyclists.

We all met back at the Peaslake village stores and all of us said how hard it actually is when you are pushing hard.  A final run up to the top of Holmbury hill (see obligatory photo) and round a few minor single tracks back to the steep descent into the car park.  A quick count confirmed we still had 6 of us present.